ZORAN ZIGIC DOES NOT WANT TO GO HOME

Zoran Zigic, former reserve policeman from Prijedor, has asked the President of the Mechanism for the International Criminal Tribunals to refuse to approve his extradition to Bosnia and Herzegovina from the Austrian prison where he is serving his 25-year prison sentence. The Austrian authorities need the MICT to authorize his transfer to BH after he has served two thirds of his sentence, where he will have to serve 15 more years in prison. The prosecution has stated that the Mechanism shouldn’t oppose the decision of the Austrian authorities 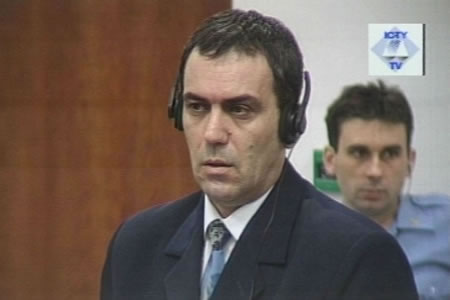 Zoran Zigic in the courtroom

After he served two thirds of the Tribunal’s 25-year sentence, former reserve police officer from Prijedor Zoran Zigic was released from an Austrian prison. Though Zigic should return home, he refuses to do so because another prison sentence awaits him in Bosnia and Herzegovina. In 1997, Zigic was sentenced before the military court in Banja Luka to 15 years.

Zigic has now called on Theodor Meron, president of the Mechanism for the International Criminal Tribunals, which will take over the functions of the Tribunal in The Hague, not to give the consent to the Austrian authorities to extradite him to BH following his release. In other words, Zigic wants to get out of prison, but would like to be given an opportunity to seek shelter in a country where he would remain unavailable to the BH authorities.

The Tribunal in The Hague convicted the former taxi driver and war-time reserve police officer from Prijedor to 25 years for his involvement in the heavy beatings and killings of non-Serbs detained in the Omarska and Trnopolje prison camps. The Tribunal’s judgment notes that Zigic used special instruments and methods of torture such as a rod with a metal ball attached to one end. Zigic also forced his victims to pretend they were dogs. Zigic has not been indicted in Banja Luka for those crimes. He was tried by the military court for killing a Serb woman during the war. Zigic accused the victim of being a ‘spy and a smuggler’. Later, he went on a rampage in a coffee bar and wounded another Serb woman. Zigic was sentenced to 15 years in prison for those crimes. Before his transfer to The Hague in 1998 Zigic had already spent a little more than four years in prison.

In Zigic’s view, he shouldn’t serve the sentence in BH. In his motion Zigic admitted that in BH he had been convicted of different crimes. In other words, he could be tried for them before a different court. But in context of a ‘broader picture’, the crimes are a part of the same narrative, because they were perpetrated at the same time in the same territory, Zigic claims. If the argument fails, Zigic has others up his sleeve. Zigic attached to his motion the letter from the former assistant to the justice minister of Republika Srpska, written in 2000. In the letter, the assistant assures Zigic that the time he spends in the Tribunal’s Detention Unit would be ‘credited against the sentence in Banja Luka’.

In the response to Zigic’s motion, the prosecution recalls that under the Agreement on the enforcement of sentences the Austrian authorities need the Tribunal consent for extradition of the convicts to other countries. This power has now been conferred on the Mechanism. According to the prosecution, the Mechanism and its President shouldn’t withhold the consent. The crimes Zigic was convicted of in Banja Luka are completely different than those he was tried for by the Tribunal. It is up to the domestic courts to decide on Zigic’s extradition so that he can serve the rest of his sentence in BH.