Former deputy warden of the Foca KP Dom (Penitentiary and correctional facility) decided not to enter his plea on any of the eighteen counts of the indictment, as is his right. Judge Agius then recorded a plea of “not guilty” on his behalf 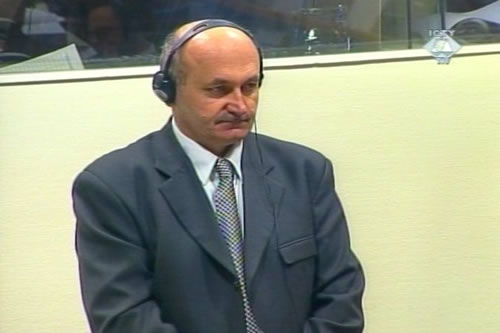 Savo Todovic in the courtroom
Further appearance of Savo Todovic, former deputy warden of the Foca KP Dom, was held before a Tribunal judge today. On 19 January 2005, at his initial appearance, he stated he would be entering his plea within 30 days. The deadline passed, but Todovic in the meantime decided not to enter his plea at all.

After having ascertained that it was indeed the final decision of the accused, Judge Carmel Agius recorded a plea of not guilty on any of the 18 counts of the indictment on his behalf. In the counts, Todovic is charged with persecutions on political, racial and religious grounds, unlawful detention of civilians, murder, torture, cruel treatment, inhumane acts, causing grievous bodily and mental harm, enslavement and other crimes committed, according to the indictment, in the Foca KP Dom between 1992 and 1993.

Todovic will be tried together with Mitar Rasevic, former guards commander in the Foca KP Dom, who has been charged with the same crimes. He has surrendered voluntarily to the Tribunal in August 2003. Since the prosecution has filed an application for the referral of their case to domestic courts, Todovic and Rasevic will in all probability be tried in Bosnia and Herzegovina. They were on the same indictment as the former warden of the Foca KP Dom, Milorad Krnojelac, who has in the meantime been sentenced to 15 years in prison.