THE GLORY AND RESPONSIBILITY OF COMMAND

Prosecution presents opening statement at the trial of General Sefer Halilovic, former BH Army Chief of Staff, indicted for his alleged failure to prevent or punish the murder of more than 60 Croat civilians in the villages of Grabovica and Uzdol in the Neretva valley in September 1993 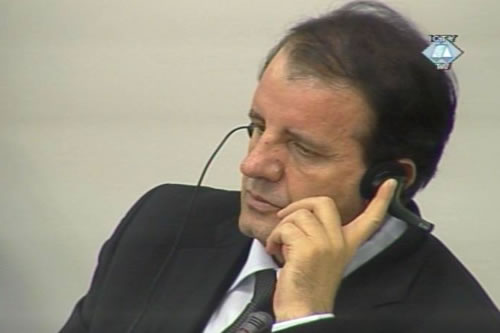 Sefer Halilovic in the courtroom
Describing Sefer Halilovic as a “commander who wanted to have the glory of victories but not the responsibility of command”, prosecutor Sureta Chana indicated in her opening statement that she would prove beyond reasonable doubt that the accused had failed to take reasonable steps to prevent or punish the crimes committed by troops under his command and control.

Sefer Halilovic, former BH Army Chief of Staff, is charged in a single count of the indictment for the murder of 62 civilians and one prisoner of war in two separate incidents in the villages of Grabovica and Uzdol in the Neretva valley. The crimes were committed in September 1993, during the military operation called Neretva ’93, commanded by the accused Halilovic. The objective of the operation was to take the part of the territory held by HVO forces in the Neretva valley and thus lift the blockade of Mostar.

The prosecution claims that the 9th Motorized Brigade and the 10th Mountain Brigade were involved in the operation at his behest. Despite the fact that these brigades “were infamous” and the fact that “everyone in Sarajevo feared them”, as the prosecution contends, Halilovic ordered that the troops from those brigades be billeted in the Croatian homes in the village of Grabovica, twelve kilometers from Jablanica where his forward command post was.

Some of the local Croats were less than willing to let them into their homes. The soldiers complained to the officers, including Halilovic. Vehbija Karic, one of the officers present there replied that the civilians who refused to cooperate should be “taken care of” summarily and thrown into the Neretva river. Halilovic, as the prosecution claims, did not react to this suggestion made by an officer subordinate to him.

The troops, however, did exactly as suggested and 33 civilians were killed in Grabovica on 8 and 9 September 1993, the prosecutor says. The youngest victim was four, and the oldest eighty-seven years old. The prosecution claims that the killings were still going on when Halilovic learned about them in the evening of 8 September, yet he failed to do anything to stop them. The following days he did nothing to investigate the incident and to punish the perpetrators. The prosecution contends that the thirty-three civilian victims are “the result of his inactivity.”

The village of Uzdol near Prozor was attacked six days later, as part of the Neretva ’93 operation. Prosecutor Chana claims that Halilovic “knew that there were civilians in the village and knew that the members of the Independent Battalion from Prozor felt a strong hatred for Croats and a desire to exact revenge” for the defeat they had suffered in the conflict with the HVO and the abuse they had been subjected to. In the opinion of the prosecutor, the accused was aware of the “danger of unleashing such troops among civilians” but nevertheless used them in the attack on Uzdol. Twenty-nine Bosnian Croat civilians were killed in the attack and a captured HVO soldier was executed. Yet again, Halilovic did nothing to investigate the crime and punish the perpetrators.

In the report on the course of the Neretva ’93 operation he sent to the Main Staff in Sarajevo on 20 September 1993, Halilovic never mentions the murders in Grabovica and Uzdol.

The prosecution will begin presenting its evidence tomorrow.