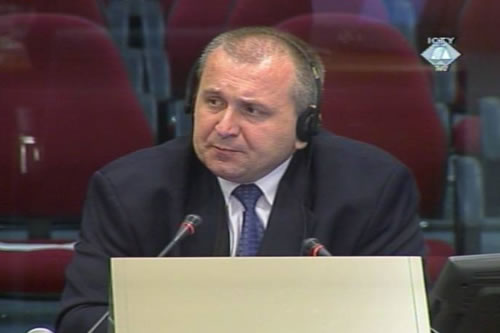 Salko Gusic, witness in the Halilovic trial
A day after the killing of the civilians in Grabovica, the military police from the BH Army 6th Corps – their area of responsibility included the village – were dispatched to the crime scene to investigate what had happened. They were turned back, however, with the explanation that “combat operations” were underway there, that the events in Grabovica were in the jurisdiction of the forward command post (FCP) in Jablanica and that they were “fully aware of them”.

Witness Salko Gusic, who was the commander of the 6th Corps at the time when the crimes were committed in September 1993, stated that his assistant commander for security, Nermin Eminovic, had reported to him a few days after the crime that the “units from Sarajevo” had caused an “incident” in which Croat civilians had been killed, and that he had dispatched the military police there. They first went to nearby Jablanica, to the FCP from where Sefer Halilovic’s commanded the Neretva ’93 operation.

The prosecutors showed a report sent by the 6th Corps military police commander to Gusic's assistant for security. “We went to Jablanica, where I consulted with Namik Djankovic from the Military Security Directorate in Sarajevo (Supreme Command Military Security Directorate). He told me that the Supreme Command’s IKM was aware of everything and that the orders were that in light of the planned action nothing should be done.” This order was given by Vehbija Karic, who was on Halilovic’s staff at the IKM, the document notes.

The prosecution argues that Sefer Halilovic, as the commander of the Neretva ’93 operation, is responsible for his failure to prevent or punish the killing of civilians in Grabovica and Uzdol.