AVRAMOV: MILOSEVIC'S ONLY SIN IS BEING "WEAK AND CONCILIATORY" 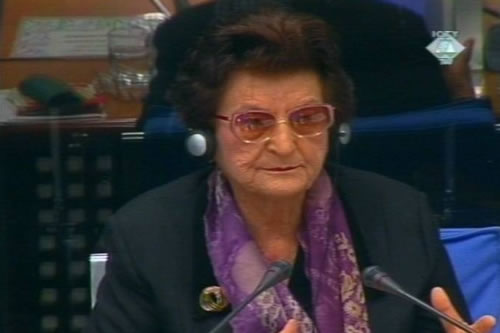 Smilja Avramov, defense witness for Milosevic
Smilja Avramov, Slobodan Milosevic's first defense witness, said Croatian president Stipe Mesic's statement that in 1991 she had participated in meetings where representatives of Serbia and Croatia "drew the future borders of Bosnia and Herzegovina" was a "bare-faced lie".

Avramov said that it was true that borders had been discussed at the meetings, in terms of what would happen with them if Slovenia and Croatia seceded. The question was, she says, what was to be the basis for the determination of the borders in that case: whether the "achievements of the revolution”, as she termed the so-called AVNOJ-based borders, or "international borders that had been determined on the basis of multi-lateral treaties after World War I" – as the Serb side wanted.

Smilja Avramov taught law at the Belgrade Law School for over four decades, but Milosevic did not call her to The Hague as an expert witness for legal matters, but as a fact witness. Avramov should testify about her contacts with the accused in the period when the conflict in the former Yugoslavia broke out; more specifically, about his views and state of mind. However, instead of answering questions put to her directly, Professor Avramov would embark upon lengthy explanations of the "context" in terms of history, international law and politics, forcing the judges to intervene quite often and to request that she try to focus and answer the questions.

As Smilja Avramov described in her testimony, Milosevic wanted to preserve Yugoslavia at any cost and was obsessed with the idea of brotherhood and unity. He advocated "maximum tolerance" by the Serb side in the negotiations and fought for a peaceful settlement of the crisis “caused by Slovenian and Croatian separatists”. He believed, as Avramov claims, that the separatists – when presented with the serious consequences of the break-up of Yugoslavia – "would come to their senses and give up on their nationalist fanaticism." He never advocated the idea of a "Greater Serbia" and did not have any influence over the JNA and paramilitary formations, even less over Serbs in Croatia and Bosnia who had "organized themselves spontaneously in self-defense," and complained that Belgrade did not give them enough protection. Milosevic, Avramov continues, had no influence over the policies pursued by Knin and Pale, because the Republic of Serbian Krajina and Republika Srpska had their own parliaments and government that guarded their independence jealously. Croatian Serb leader Milan Babic, in her view, was a "slightly extravagant person, who got accustomed to the role of a statesman and leader and did not allow anyone to exert influence over him." On the other hand, Bosnian Serb Radovan Karadzic was "highly intellectual, a strong personality of high moral standing who was always on an equal footing with Milosevic." Karadzic was an "unquestioned authority" among the Bosnian Serbs, who resented Milosevic for being "wishy-washy".

For her part, Avramov holds it against Milosevic that he was "too cooperative and conciliatory" towards the European Community, sometimes "to the detriment of Serbian interests". Because of his "excessive desire to be conciliatory", Avramov parted ways with Milosevic in April 1993, when she left the team negotiating with the international community.