2004-06-07 THE HAGUE
SENSE Interview: Zeljko Kopanja, manager and founder of the Nezavisne novine in Banja Luka

Nine years after the indictments against Karadzic and Mladic were issued, Zeljko Kopanja asks why only indictees from his ethnic group are "avoiding making that heroic gesture and going to The Hague…, putting the people in RS in an unenviable situation." 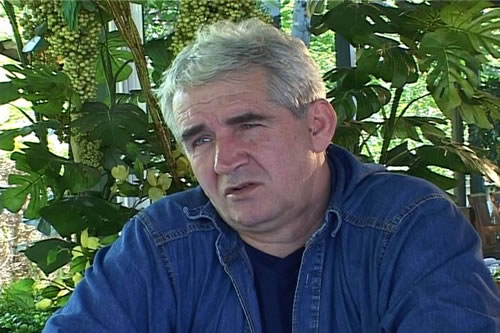 Zeljko Kopanja
Although he lost both his legs in October 1999 when his booby-trapped car exploded, Zeljko Kopanja, manager and founder of the Nezavisne novine [Independent Daily] in Banja Luka, continued to write about war crimes and organized crime – topics that were, he says, the "primer" for the attempt on his life.

Nine years after the indictments against Karadzic and Mladic were issued, Kopanja asks why only indictees from his ethnic group are "avoiding making that heroic gesture and going to The Hague," thus "putting the people in RS in an unenviable position" – economically, politically and morally.

In an interview for SENSE, Kopanja claims that the citizens of Republika Srpska are by and large hostages of Radovan Karadzic and Ratko Mladic, and that they are still mystified by tales about an alleged deal struck between Holbrooke and the former Bosnian Serb leader.

The founder of the "most free" newspaper in Bosnia’s Serb entity cannot find an explanation for the apathy that reigns among people, saying they “have withdrawn into their shells and put up with this state." He adds, "Out of fear or problems that they themselves may have, because of their unwillingness to undergo some kind of catharsis, they are not ready to speak up."

On the other hand, says Kopanja, the fact that Karadzic and Mladic are still at large shows that the myth of the fugitives is still alive. Kopanja thinks that myth is kept alive by the "uneducated class, which is easy to manipulate," and also by "those who love Karadzic and Mladic and think about them the least." Adds Kopanja, "They exploit it for their own economic interests and political positions, because it is profitable for promotion inside the SDS," the party which is, he maintains, still under the control of Radovan Karadzic.

In Kopanja's view, arresting the fugitives would not lead to any upheavals or protests among the population. Life would go on and "quite a few people would heave a sigh of relief, expecting things to get better." Any frustrations would help people understand the truth "that Serbs, too, committed war crimes as did Bosniaks and Croats."

"I am afraid that we are always the last to air things, never ready to face the truth and to undergo this sort of cleansing process. It is painful, but inevitable," Kopanja concludes.