The defense team of the former Chief of the VJ General Staff claims that it has not received any remuneration for its work since last April and warns that it will be unable to prepare properly for the defense of its client, who is accused of crimes against humanity in Kosovo. 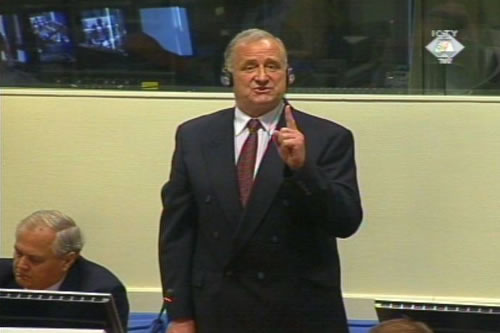 Dragoljub Ojdanic in the courtroom
The defense team of Dragoljub Ojdanic, former Chief of the VJ General Staff, warned at today’s status conference that it would not be able to represent its client effectively at trial. General Ojdanic was indicted together with Milan Milutinovic and Nikola Sainovic for crimes committed in Kosovo in the first half of 1999. No trial date has been set yet.

American lawyer Peter Robinson stated that General Ojdanic's defense team had not received any remuneration for work since last April and that it would not be in a position to conduct any investigations, study millions of pages of evidence--including exculpatory evidence--or to prepare for the cross-examination of the prosecution’s first witnesses. The prosecution has announced that it plans to call between 100 and 120 witnesses in the four months it estimates its case will take.

General Dragoljub Ojdanic surrendered to the Tribunal in April 2002 and by April 2003, the defense had spent all the funds allocated to it to prepare for trial. The defense cannot expect to receive any additional payments before the beginning of the trial. The Registry and the Appeals Chamber of the Tribunal have in the meantime dismissed the defense’s requests for additional funds. As a result, the lead counsel, Tomislav Visnjic, and his co-counsel Robinson continue to work pro bono, without any pay.

General Ojdanic supported the requests made by his defense team. He asked pre-trial judge Patrick Robinson to do something to prevent "the defense from being in an inferior position in relation to the prosecution, which piles thousands of pages of exculpatory material on us every day, justified as this exercise is.”

General Ojdanic was given an opportunity to address the judge and expressed his "resignation" with the fact that "those who defended the integrity of their country in a moral and honorable way have been indicted… and those who have been committing heinous crimes and ethnically cleansing Kosovo have not."

The other two accused and their lawyers did not have any remarks to make. The health of Milan Milutinovic was discussed in private session.