Six leaders of the so-called Croatian Community of Herceg-Bosna surrendered voluntarily to the Tribunal today. Tomorrow they will enter their pleas on all 26 counts of the indictment, which charges them with the persecution of Bosniaks, murders, detention, deportation and other crimes committed in their areas of responsibility. 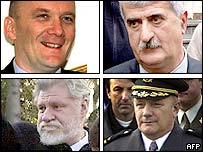 Jadranko Prlić, Milivoj Petković, Bruno Stojić i Slobodan Praljak
The initial appearance of the six former military and political Herceg-Bosna officials who surrendered voluntarily to the Tribunal today has been scheduled for Tuesday 6 April at 14:15. They will enter their pleas on the 26 counts of the indictment, which charges them with the persecution of Bosniaks, murders, detention, deportation and other crimes committed in their areas of responsibility. The indictment, with the names of all six indictees, was made public today in its entirety. The indictments against four on the list were unsealed on Friday: Jadranko Prlic, former Herceg-Bosna prime minister; Bruno Stojic, former HB Defence Minister; and former HVO Chiefs of Staff, Generals Milivoj Petkovic and Slobodan Praljak. After their surrender to the Tribunal today, the names of Valentin Coric and Berislav Pusic were also unsealed. Coric is the former commander of the HVO Military Police. The indictment alleges that the "military police regularly played important roles in administering Herceg-Bosna prisons and detention facilities." Pusic was the president of the commission in charge of all Herceg-Bosna prisons and detention facilities and he was also president of the HVO Commission for the Exchange of Prisoners. According to the indictment, he was in charge of issues related to the detention, transfer and deportation of prisoners. The six political and military HVO leaders are charged in the indictment with participation in a "joint criminal enterprise" to "politically and militarily subjugate, permanently remove and ethnically cleanse" Bosniaks and other non-Croats from the areas declared part of Herceg-Bosna. This is to date the most comprehensive indictment for crimes committed against Bosniaks during the conflict between the HVO and the BH Army: the Office of the Prosecutor included every violation of international humanitarian law and all the locations where crimes were committed. At the same time, this is the indictment that concerns the responsibility of the highest-ranking political and military leaders of Herceg-Bosna, while implicating the leaders from Croatia--Tudjman, Susak and Bobetko (who all subsequently died). According to the indictment, the Croat-Bosniak conflict was an international one because of the "leading role" played by politicians from Croatia and the involvement of the Croatian Army in the war in BH. The first indictments for HVO crimes against Bosniaks were issued in 1995: first the indictment for the massacre in Stupni Do, then the indictments for crimes in the Lasva valley, in which the central charge concerned the Ahmici massacre (this atrocity was the subject of yet another indictment issued in 2000 – the one against Pasko Ljubicic). The events in the Lasva valley were dealt with in five trials, including those of the highest-ranking political and military figures in the Central Bosnia HVO--Blaskic and Kordic. These events are not included in the latest indictments against the political and military leaders of Herceg-Bosna. The new indictment deals with events that have not been the subjects of other trials (with two exceptions). In terms of territory, they cover Herzegovina and southern Bosnia (Jablanica, Gornji Vakuf). One of the exceptions is the crime at Stupni Do in Central Bosnia, which prosecutors included in the latest indictment. They are charging the HVO leadership with it, considering the leaders responsible for failing to punish the perpetrator of the crime. In late 1998, the prosecution issued its first indictment for crimes committed against Bosniaks in Herzegovina; it was against Tuta Naletilic and Stela Martinovic, commanders of an HVO unit in the Mostar area. They are not mentioned in the new indictment, but, in the second exception, top HVO commanders are now charged with the crimes for which they were tried. In the 26 counts of the indictment, it is charged that the six accused, by their actions and omissions, are responsible for the persecution of Bosniaks, murders, cruel treatment, rapes, mass detention, deportations, destruction of towns and villages and plunder. Specific chapters deal with crimes committed in the municipalities of Prozor, Gornji Vakuf, Jablanica, Mostar, Stolac, Capljina, Vares and Ljubuski, and in camps and prisons at Heliodrom, Dretelj, Gabela and Vojno.