HOW TO PUNISH CRIME AND REWARD GUILTY PLEAS AND COOPERATION

In their closing arguments at the sentencing hearing for Milan Babic, the prosecution and defense stressed that his guilty plea, remorse and cooperation will contribute substantially to the establishment of truth and will assist the Tribunal in fulfilling its mandate; both sides sought a sentence of "less than 11 years in prison.” 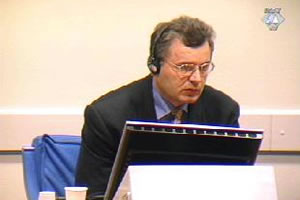 Milan Babic in the courtroom
"Milan Babic stood before this Tribunal as soon as the indictment against him was issued, even before an arrest warrant was put out. His guilty plea was much more than a formality: there was a detailed description of the events in which he participated and an expression of sincere remorse. This sets Babic apart from all the other accused who have pleaded guilty before this Tribunal," said prosecutor Hildegard Uertz-Retzlaff in her closing argument at the two-day sentencing hearing of Milan Babic.

The prosecutor stressed that Babic's participation in the joint criminal enterprise is not in question, although she says he wanted to achieve the main goal of the enterprise – the permanent removal of non-Serbs from large parts of the territory of the Republic of Croatia that Serbs had declared as "theirs" – by negotiation and not by force. As the president of the SAO Krajina in August 1991, he publicly opposed the attack on the village of Kijevo, launched by the police chief in Knin at the time, Milan Martic. This and other attacks on the non-Serb population were carried out, but Babic remained in political office. His speeches contained nationalist rhetoric and he even kept in touch with Slobodan Milosevic and the Bosnian Serb leadership, who have been indicted for participating in the joint criminal enterprise. However, the prosecutor said that Babic did not have control over forces involved in the ethnic cleansing campaign and was not the leading figure in the enterprise; "rather, he was lured, used and intimidated by other participants, particularly by Milan Martic and Slobodan Milosevic."

The prosecutor claims that "the power of propaganda and the perfidious media machinery," as well as the "charisma of Slobodan Milosevic," had a great influence on Babic. He fell under the spell and could not resist his own political passion and the vanity that prompted him to become a public figure. By his own admission, he became an "ethno egotist." But nationalism was not at the core of his errors, said the prosecutor. He did not express hate towards the Croatian people, and in the beginning of 1992, he finally severed all links with Milosevic and Martic and found himself labeled a traitor.

Milan Babic did not begin feeling remorse and guilt when he arrived in The Hague but much earlier. The prosecutor said that once at the Tribunal, his substantial cooperation with her office began. She specified the detailed information Babic provided about the organization of Serbs in the Knin Krajina and the support they received from Slobodan Milosevic and the JNA, whose units were directly involved in ethnic cleansing. He recounted in detail the contents of more than 30 meetings he had with Milosevic and other participants in the joint criminal enterprise and disclosed the way in which attacks on villages and towns with a non-Serb population were planned and carried out.

Babic provided the prosecution with about 150 documents that might never have been obtained otherwise. Some of the documents have been admitted into evidence at the Milosevic trial, at which Babic was the crown witness. His testimony at the trials of Krajisnik, Martic, Stanisic, Simatovic, Seselj and Karadzic and Mladic--if they ever come to The Hague--will be of similar importance.

Because of Babic’s crimes, Uertz-Retzlaff said the prosecution would seek a severe punishment. But because of his "public expression of total and unconditional remorse,” along with his immense assistance to the Tribunal for the fulfillment of its mandate, the prosecution recommended that Babic be given a sentence of "less than 11 years in prison."

In this case, the prosecution and defense are practically on the same side. Peter Müller stressed that his client had quickly found his way back to reclaim his moral integrity, primarily by participating in the effort to establish the truth. "He is the first participant in the joint criminal enterprise with the courage and strength to do it," Muller told the court, despite the fact that by doing so he endangered his own life and the lives and peace of his family.

Pointing out that in the jurisprudence of the Tribunal, guilty pleas, remorse and cooperation have been taken as substantial factors in mitigation, Babic's other lawyer, Robert Fogelnest, called upon judges to bear in mind that Biljana Plavsic, former president of the Republika Srpska, was sentenced to 11 years in prison. In Fogelnest's opinion, any comparison between their guilty please, expressions of remorse and cooperation with judges will result in a "much milder sentence" for Babic.