The judgment was passed by majority, with Judge Schomburg dissenting in a highly critical opinion 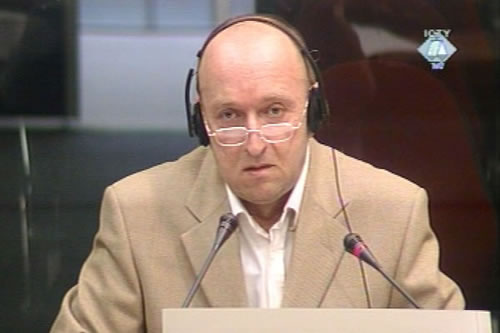 Miroslav Deronjic in the courtroom
Miroslav Deronjic was sentenced today to ten years in prison for the crime to which he had pleaded guilty – the persecution of the Bosniak population from the village of Glogova in eastern Bosnia. The judgment was passed by majority (2:1). The presiding judge Wolfgang Schomburg remained in the minority with a highly critical dissenting opinion.

At the time when the crime was committed, Miroslav Deronjic was a local official of the Serbian Democratic Party (SDS) and the president of the Crisis Staff in the municipality of Bratunac. In that capacity he ordered an attack on the Bosnian village of Glogova on 9 May 1992 and the deportation of about 2,000 of the civilians living there. Sixty-five civilians were killed in the attack, many houses were burned and destroyed and the village mosque was also destroyed. Bearing in mind the gravity of the offence, a large number of victims, Deronjic's political position and his intent to ethnically cleanse that part of Bosnia, the Chamber – it is stated in the statement of reasons of the Judgment – should impose an "extremely serious punishment" to the accused.

However, the mitigating circumstances tipped the scale in his favor, particularly in the opinion of judges Florence Mumba and Carmel Agius. In Deronjic's case, the mitigating circumstances were his guilty plea and substantial cooperation with the prosecution, assisting , as the Judgment states, the Tribunal in its search for the truth, preventing all attempts to revise history and sheltering the victims and witnesses from testifying and thus reliving the traumatic events of May 1992. The prosecution in fact based its recommendation that Deronjic be given 10 years in prison on his cooperation. The majority of the bench decided to accept the recommendation and thus encourage other accused to plead guilty and cooperate with the prosecution.

Judge Schomburg however thinks that the punishment is not proportional to the crime and is not within mandate and spirit of this Tribunal. According to him, the crime to which Deronjic pleaded guilty "deserves a sentence of no less than twenty years of imprisonment". In a brief summary of his dissenting opinion that he read after pronouncing the sentence imposed by the majority, Judge Schomburg criticized the prosecution for having limited Deronjic's responsibility in the indictment to "one day and to the village of Glogova." Secondly, Judge Schomburg adds that the "heinous and long-planned crimes committed by a high-ranking perpetrator do not allow for a sentence of only ten years", which in light of his possible early release could mean that the accused would spend only six years and eight months in prison.

At the end of his dissenting opinion, Judge Schomburg quoted a statement by one of Deronjic's victims. The victim said that his guilty plea "can heal the wounds" that the Bosniak community in eastern Bosnia still feels - "provided that he is punished adequately". According to the victim, "a mild punishment would not serve any purpose," and Deronjic "does not deserve any compassion because he did not show any, not only to people of Glogova, but to the other Muslim Bosnians of Bratunac and Srebrenica.”