TRIBUNAL EXPRESSES ITS GRATITUDE TO JUDGE MAY

At a special session, the Tribunal expressed its gratitude to Judge Richard May for all he has done in The Hague over the past six years. May leaves "proud of the past and confident in the future of the Tribunal" 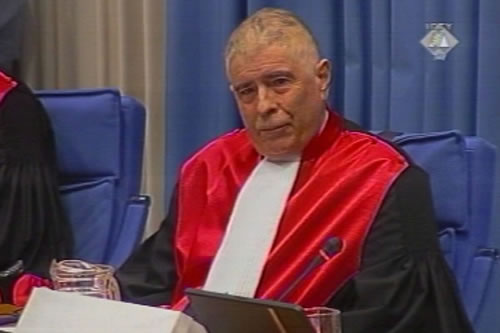 Richard May upon his resignation from the Tribunal
“It has been my privilege to serve more than ten years in this Tribunal. It is now time for me to go but I should do so with pride in the past of the Tribunal and confidence in its future.”

With these words, Judge Richard May bade farewell to his colleagues the judges, prosecutors, defence counsels and other participants and guests at the special session of the International Criminal Tribunal for the former Yugoslavia. Judge May resigned last month for health reasons. Although his illness has left its mark on his physique, his voice sounded just as sharp and resolute as in the past two years when he interrupted political speeches of the accused Milosevic.

Saying that for over six years Judge May has been “one of the Tribunal’s shining lights”, President of the Tribunal Theodor Meron stressed in particular his “incomparable sense of justice and fairness”, and his role as “a pioneer and a leader in this great adventure” of formulating and applying the rules of procedure and evidence striking a delicate balance between “the duty to punish serious crimes” on the one hand and “the right of the accused to a fair trial” on the other.

Apart from praising the importance of Judge May for the Tribunal and international justice Chief Prosecutor Carla del Ponte stressed the work he’s done for the victims of the conflicts in the former Yugoslavia and the contribution he has made to the establishment of a just and lasting peace in the Balkans. “Your Honor” – said del Ponte, speaking directly to Judge May – “your name has become synonymous with the best that this tribunal has produced. We will miss you.”

On behalf of all the defence counsels, Judge May was thanked by the British lawyer Howard Morrison, while the Registrar of the Tribunal, Hans Holthuis, speaking on behalf of the other ICTY staff, expressed his respect for the Judge’s "legal skill, wisdom, self-sacrifice and common sense.”

On behalf of the British lawyers and judges, prosecutor Geoffrey Nice, who has been representing the prosecution before Judge May in two lengthy and complex trials, reminded those present of his career as the leader of the opposition at Westminster and his attempt at the election “to unseat a politician whose time you (May) thought was up.” To “our eventual good fortune”, Nice continued, “Margaret Thatcher survived” the challenge, which allowed Richard May to take early promotion to bench and to serve 10 years as a much respected and admired judge on that same Midland Circuit, where he became noted and liked for his non-interventionist, no-nonsense approach.”

Like all the other speakers, at the end of his address, Nice wished Judge May and his wife Radimila a full and speedy recovery from the illness which has forced him to resign. 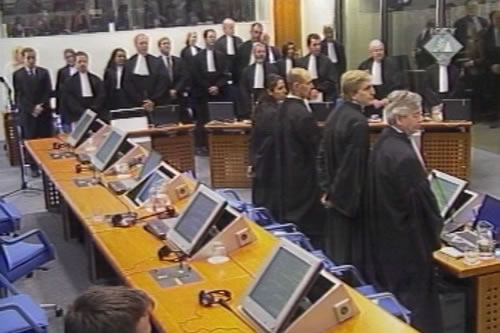