If Milosevic did, as he claims, "defend the lives and property of Bosnian Serbs who were in danger" in Bosnia and Herzegovina, the disproportionate force used and the nature of the crimes committed rule out the possibility of pleading "self-defense" – this is the conclusion of the latest filing of the Australian amicus curiae. 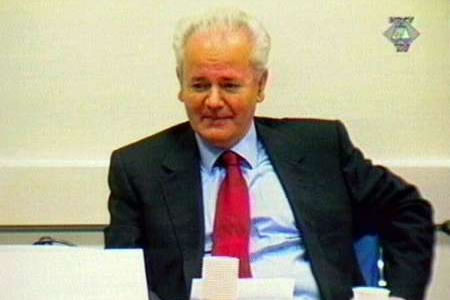 Slobodan Milosevic in the courtroom
When it comes to pleading self-defense, the case of Bosnia and Herzegovina differs to a certain extent from those of Kosovo and Croatia, but the conclusion is the same: there are little or no grounds for Slobodan Milosevic to plead "legitimate self-defense" in his defense against the charges of genocide and other crimes in Bosnia and Herzegovina.

This is, in brief, the conclusion of the Australian amicus curiae, Professor Timothy McCormack. At the request of the judges, he prepared a report on whether Milosevic can, in response to the charges against him, plead self-defense. After the reports considering the "defense of self-defense" in the cases of Kosovo and Croatia, the report relating to Bosnia and Herzegovina was made public yesterday by the Tribunal.

In the case of Kosovo and Croatia, Milosevic can say that these involved military opposition to "illegal military forces" threatening the territorial integrity of Serbia or sovereignty of the former SFRY (which indeed he has often done so far). In the case of Bosnia and Herzegovina, the accused has invoked in the course of the trial primarily the need to defend the lives and property of Bosnian Serbs in the face of the attacks and persecutions launched by the Muslim forces.

Analyzing Milosevic's opening statement at the beginning of the trial and the claims he has made in his cross-examination of prosecution witnesses, McCormack states that the accused "consistently levied accusations about the persecution of Bosnian Serbs, illegal arming of Muslims and creation of their paramilitary forces and crimes committed against Serbs before the war broke out in April 1992". Milosevic has furthermore, as McCormack states, claimed that the JNA was a legal military force in BH and that it intervened only to separate the warring factions and to protect civilians regardless of their ethnicity. The accused has also claimed that some of the crimes alleged in the indictment "have been invented to demonize Serbs" and that some were committed by Muslims themselves and then "blamed on the Serbs". In cases where he allowed that Serbs may have committed a crime, he ascribed it to local perpetrators or paramilitary forces over whom Belgrade had no authority, and therefore he could not be held responsible for their actions.

The indictment, however, does not charge Milosevic with crimes that the forces under his command may have committed in the defense of the lives and property of Bosnian Serbs. As McCormack indicates, "the indictment focuses exclusively upon the nature and extent of the military force deployed and the identity of te targeted victims of Serb military operations" and charges Milosevic with "organized and planned campaign to cleanse the non-Serb population from the territory of Bosnia and Herzegovina controlled by Bosnian Serbs." Most of the specific counts of the indictment, the amicus curiae states, pertain to the takeover of towns by Serb military and paramilitary forces, which is followed by forcible and permanent "cleansing" of the non-Serb population by murder, forcible deportation, persecution, discrimination, destruction of homes, seizure of property and similar acts.

The nature of these acts, McCormack concludes, is incompatible with the arguments of self-defense: namely, that the use of such disproportionate military force was the "necessary minimum" needed to protect the lives of Bosnian Serbs who were in danger.

Again, just as in cases of Kosovo and Croatia, in the case of Bosnia and Herzegovina the key issues – according to McCormack – are the knowledge of the accused and the "issue of proportionality". If the accused knew about the disproportionate use of force, but decided not to act within his authority to prevent it, Milosevic cannot invoke "self-defense", because, as McCormack concludes, the nature of the atrocities perpetrated was far in excess of any necessary force to defend the lives and property of ethnic Serbs, which the accused claims he was defending.