A CAMPAIGN OF TERROR ORDERED BY THE "HIGHER AUTHORITIES"

The prosecution and defense rest in the trial of Radoslav Brdjanin, former president of the Crisis Staff of the so-called Autonomous Region of Krajina, who stands accused of genocide in northwestern Bosnia. 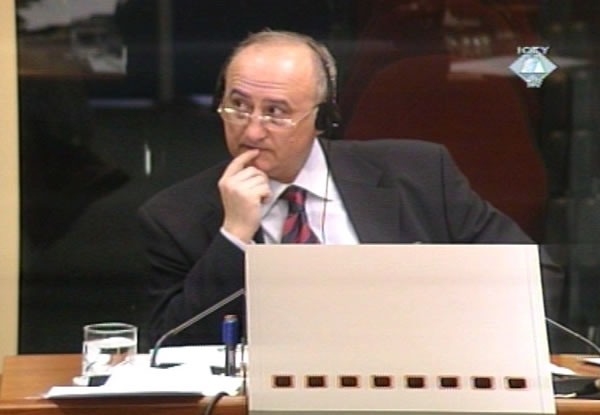 Goran Neskovic, witness at the Brdjanin trial
In their effort to shed some light on the "Mice Affair,” judges called Goran Neskovic as a witness of the court to testify at the very end of the trial of Radoslav Brdjanin. Neskovic is the former Deputy Justice Minister of the Republika Srpska and liaison officer to the Hague Tribunal.

During its case, the prosecution tried to prove that the notorious "Mice" group – made up of nine soldiers and seven police officers from Doboj – was sent to Teslic in June 1992 on the orders of Banja Luka’s highest authorities in order to speed up the "ethnic cleansing" of the Muslim and Croatian minority in the town where, before the war, Serbs made up 55 percent of the population

“Mice” carried out their mission very efficiently: in June 1992, they committed several murders, robberies, extortion operations where money and valuables were taken, kidnappings and other crimes, creating an atmosphere of terror and lawlessness which made Muslims and Croats leave town. At the insistence of the town’s citizens--not only the remaining Muslims and Croats but Serbs, too--the local authorities ordered their arrest in late June. The operation was carried out jointly by police officers from Teslic and Banja Luka.

During questioning after their arrest, five members of the group confessed to some of the murders, while others denied any involvement in the crimes. The investigation, however, was never concluded. Three members of the group were released in mid-July, and the rest were freed by 6 August. The prosecution claims they were released after an intervention by "higher authorities" from Banja Luka.

Among other evidence, the prosecution relies on a statement made by a local official at a closed session of the Crisis Staff in mid-August 1992. In it, the official says the "Mice group" had "official authorization from a superior military command to carry out a mobilization and establish a civilian government in the municipality” and that "all the authorities were acquainted with it." Prosecutors have the minutes in their possession.

Goran Neskovic appears on the stage three times in the "Mice affair,” as Judge Carmel Agius noted during his testimony. The first time was in July 1992, when he was the president of the Superior Court in Doboj and ordered the first group of prisoners released, allegedly for lack of evidence. Neskovic appeared on the stage for the second time in August 1992, when he intervened to have the arrested members of the "Mice group" transferred from a jail in Banja Luka to Doboj. They were subsequently all released. Finally, in 1996 – as the deputy minister of Republika Srpska and liaison officer to The Hague Tribunal – Goran Neskovic handed over to the Banja Luka police the entire court file on the "Mice affair." It then disappeared without a trace, finally to reappear in the possession of the Office of the Prosecutor. On that occasion, Neskovic "failed" to make a copy of the documents which would be kept in the court files.

Answering the sometimes blunt questions of prosecutors and judges, Neskovic avoided direct answers, claiming that everything he did "he did according to law.” He said he ordered the release of the "Mice group" at the request of the public prosecutor and that he handed over court files to the police on the orders of the Justice Minister. Neskovic requested a private session (closed to the public) for his answers to some "sensitive" questions.

The extent to which Goran Neskovic—as a witness of the court--helped shed light on the "Mice affair" will become clear only once the judgment in the Radoslav Brdjanin case is rendered. Brdjanin was the president of the Crisis Staff of the Autonomous Region of Krajina, charged with genocide, persecutions, killings, detention and the deportation of non-Serbs in northwestern Bosnia.

At the conclusion of the presentation of evidence, Presiding Judge Agius called the Brdjanin case "the biggest and most complex case after the Milosevic case.” The date for the closing arguments of both sides will be set later.