Testimony about "inflammatory rhetoric" of the former President of the Crisis Staff of the Autonomous Region of Krajina that the prosecution deems crossed the threshold dividing "politically incorrect speech" from war crimes. 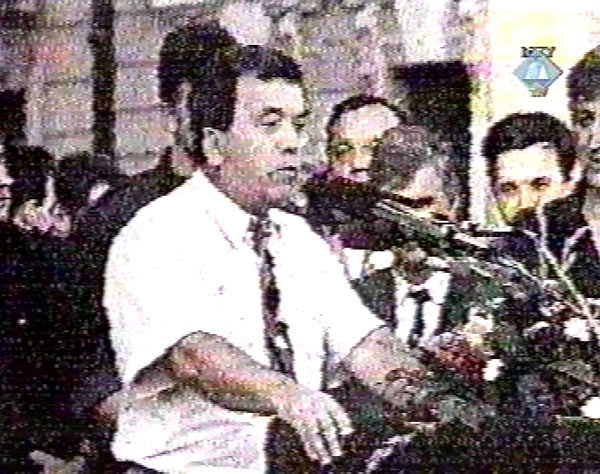 Radoslav Brdjanin at the public meeting
“He spoke a lot and all the time…but he never said anything good. Every speech he made was hate speech….”

This is how protected witness BT-94 described the rhetoric used by Radoslav Brdjanin, former President of the Crisis Staff of the Autonomous Region of Krajina (ARK), accused of genocide and other war crimes in north-western Bosnia. In the indictment, he is charged, among other things, with having had a leading role in a 1992 and 1993 propaganda campaign of incitement to crimes which prosecutors call "an essential component of the plan of the Serbian Democratic Party (SDS) to create a Serbian State."

Witness BT-94 is a Bosnian Croat, most probably a journalist, who lived in Banja Luka in the period covered by the indictment. He kept a diary of events in the town. Among other things, he kept a record of the public appearances of the four leading figures of the Banja Luka SDS – the people he describes as the "four riders of the Apocalypse.” One of them was Radoslav Brdjanin, the man whose "inflammatory" rhetoric was particularly notable. The witness claims that the then-President of the Crisis Staff of the ARK saw himself as a "godsend for the masses"; he was "the lord of life and death" for the non-Serb inhabitants of Banja Luka and the other municipalities of north-western Bosnia that were part of the ARK.

BT-94 testified about that last June during the prosecution case. He returned to The Hague last week when the Trial Chamber summoned him to appear before it again and clarify his claims about the destructive effects of Brdjanin's rhetoric.

The witness claims that Brdjanin's greatest responsibility lay in the fact that "he was not responsible;” because "he had to know the effect his inflammatory speeches would have among the extremists who then committed all kinds of acts." He then offered the following example:

“If a national leader says in front of an excited crowd, 'We will fight for what is ours, and in the next 100 years we will expel the infidels and heathens,’ it is clear what that means. When you hear that, Your Honours, you will reject these ideas, but when a primitive person, frustrated by his poverty and the events around him hears this …, he will be ready to do anything he can to crush the infidels and heathens.”

Brdjanin's “inflammatory rhetoric” was highly publicized in the media, both in the daily “Glas Srpski” and on local Serb radio and television. Several video clips of his public appearances were shown in court. At a mass rally, Brdjanin attacked those among the Bosnian Serbs who advocated co-existence and peace:

“The leftist forces who again offer us co-existence must know that it is an obligation of every Serb in the next 100 years to wipe his feet on the infidels and heathens who have soiled our land.”

During the prosecution case, a tape of an interview was shown in which Brdjanin rejects accusations about prison camps such as Omarska, Keraterm and Manjaca that existed in the ARK in 1992, asking, “After all, if Russians and Germans could have camps, why should Serbs not have them?”

Brdjanin's public appearances, the prosecution argues, were a direct incitement to violence against other ethnic groups; that is why his "inflammatory rhetoric" crossed the threshold dividing "politically incorrect speech" from war crimes.