EUROPEAN MONITORS' PROTESTS IN DUBROVNIK WERE IN VAIN

Former member of the European Community Monitoring Mission testifies about "incredible" claims that Dubrovnik was shelled by forces "out of JNA control" and the accused General Pavle Strugar's assertion that damage to the Old Town was "the result of the actions launched by Croatian units." 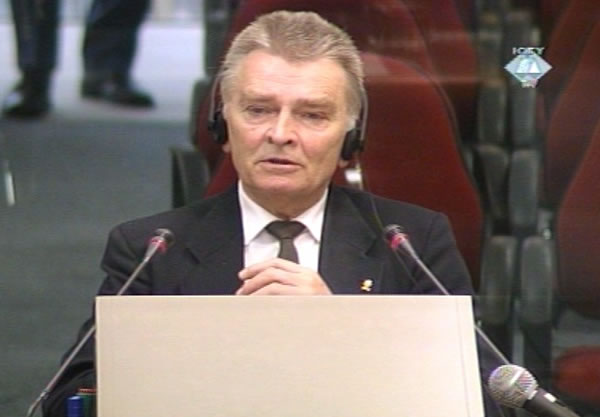 Per Hvalkof, witness at the Pavle Strugar trial
Per Hvalkof, a Danish Army officer who during the second half of 1991 was the deputy head of the EC Monitoring Mission (ECMM) Regional Centre for Croatia in Split, testified at the trial of General Pavle Strugar about a number of protests sent to the accused and other JNA commanders by European monitors when the attacks on Dubrovnik started in October 1991.

From 1 October until the end of November, the Croatian authorities and the JNA signed 13 cease-fire agreements, yet the shelling did not stop. Hvalkof arrived in Dubrovnik on the eve of 5 December, just before the negotiations in Cavtat (place close to Dubrovnik) began. It seemed then that the agreement was about to be signed, sealed and delivered.

At the request of the JNA delegation, the EC monitors did not attend the negotiations, but at the end of the day, as Hvalkof said, "The Croatian ministers expressed optimism and hope. Admiral Jokic had softened up and became quite friendly." From their behaviour and what could be seen, Hvalkof testified, the atmosphere seemed positive and there seemed to be "hope for a positive outcome."

Instead, in the early morning of 6 December, a new attack on Dubrovnik began. From his room in the Hotel Argentina, where the European monitors and most of the foreign reporters were located, he saw "shells hurtling towards the Old Town walls" and "some of them impacting on the old Dubrovnik port."

Before taking shelter in the basement of the Hotel Argentina, Hvalkof sent a protest letter to Admiral Jokic. A few hours later he received a copy of the Admiral's message to Croatian authorities in which Jokic apologized for the shelling of Dubrovnik but claimed it was something that "got out of the JNA control."

In his diary, tendered into evidence by the prosecutor, Hvalkof jotted down his comments next to his note about the events - "incredible." He testified that the Yugoslav army was "professional and well organized," and it seemed to him that it was "completely incredible that an intense and prolonged shelling would be the result of a loss of control." According to Hvalkof, it was not "sporadic shooting by individuals who got out of control."

The prosecutor showed the witness the letter sent the very same day by the commander of the "Dubrovnik operation," General Pavle Strugar, to the Croatian foreign minister, in which he claimed that Croatian forces had launched "an unprovoked attack on the JNA" in the early morning and that the units under his command returned fire. Strugar's letter says he ordered his troops to cease fire at 11:15 hours, which they did, but "the Croatian side did not comply with the cease-fire."

In his letter, General Strugar also stated that damage to buildings in the Old Town of Dubrovnik were the consequence of actions launched by Croatian units, a claim that Hvalkof described in court as "double Dutch or Chinese." It could lead one to conclude, said Hvalkof, that "Croats were shelling themselves. I did not quite understand it at the time, nor do I quite understand it now."

General Strugar's defence, in its cross-examination, challenged the testimony, trying to show that Hvalkof was a "biased observer" who did not see the situation in Dubrovnik, nor the role the JNA played in the shelling, realistically. The defence also tried to show that EC member countries exerted pressure on ECMM members and gave them instructions on what stand to take regarding the conflict in Yugoslavia. The witness refuted the claims, stressing that the monitors strove to be neutral, unbiased and objective in the reports they filed to their countries.