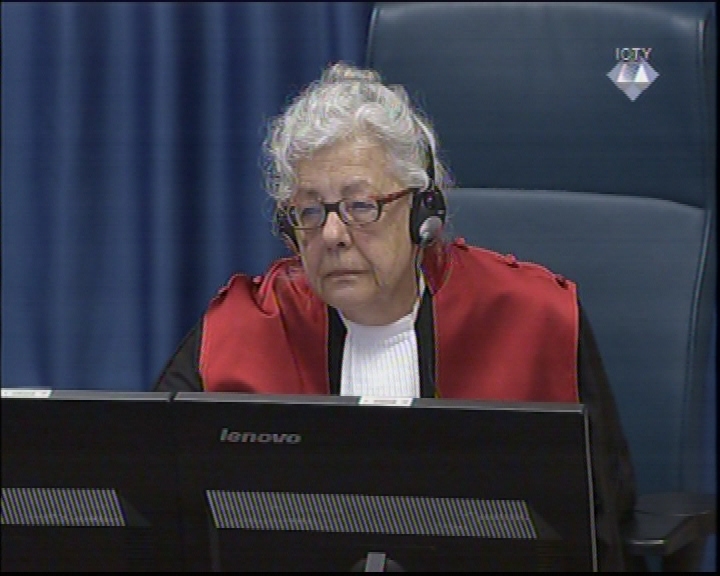 For several reasons, I disagree with most of the majority’s findings.

First of all, I find that the climate of intimidation to which Vojislav Šešelj subjected the

witnesses, by his conduct inside the courtroom and by that of his associates outside the

courtroom, which also resulted in contempt proceedings, has not been taken into account

by the majority. Yet, this factor should have been included in the Chamber’s analysis of the

evidence, and more specifically of the prior statements of various witnesses who later,

partially or completely, withdrew their statements when they came to testify before the

Chamber. These statements, which incriminate Vojislav Šešelj, often corroborate one

another, but the majority does not take this element into consideration.

Furthermore, I find that insufficient reasoning, or no reasoning at all, is provided in

support of most of the majority’s findings, in contravention of a Trial Chamber’s obligation

to provide a reasoned judgment for the benefit of the Accused and of the Prosecution.

According to this principle, questions of law and fact, that form the basis of the Chamber’s

I note, for instance, that the majority refers to witnesses’ written statements and to

their testimonies, without providing any explanation, even though these various pieces of

evidence are often contradictory. I also note that the majority’s reasoning does not include

evidence on the record. This prompts the majority, for instance, to consider the forced

displacement in buses of non-Serbs from their villages as a “humanitarian aid” operation,

which is not a reasonable conclusion in light of the evidence on the record.

In addition, the majority very seldom mentions the applicable law, which is often

contradicted by the reasoning followed by the Chamber; in the event that it does follow the

applicable law, the Chamber adds standards that are not provided for in the Tribunal caselaw.

Šešelj’s responsibility. For instance, an element that is relevant when reconstructing the

overall historical background, such as the war situation in the former Yugoslavia, which,

according to the majority, simply originated from an unlawful secession, is deemed relevant

the question of responsibility. Another example: the war, which the majority seems to

consider as legitimate, for it was aimed at defending Serb interests, or the fact that the

non-Serbs armed themselves, are considered relevant to support the exclusion of the

existence of a widespread or systematic attack in Croatia and in BiH, and to discard the

crimes of destruction of villages or religious sites. One last example: the legality of

excluding Vojislav Šešelj’s responsibility for aiding and abetting, without taking into

account the applicable case-law on this issue. The judgment of the majority is replete with

rather than ius in bello, the sole relevant consideration before this Tribunal.

Indeed, the Tribunal’s competence must be limited to determining whether war crimes

or crimes against humanity have been committed and, thereafter, whether such crimes may

have involved the responsibility of the Accused.

I am, furthermore, satisfied that we have all the requisite evidence on the record to

Croatia and in BiH and that crimes against humanity were committed in this context,

including in Vojvodina (Serbia).

Likewise, we received ample evidence that established the existence of a joint criminal

paragraph 8 (a) of the Indictment. The purpose of this JCE, as the Prosecution clearly

alleges - as opposed to what the majority contends - was to force the non-Serbs, through

the perpetration of crimes, to leave parts of the territory of the former Yugoslavia.

In my view, all the conditions have also been met to convict Vojislav Šešelj for the

denigration of the non-Serbian civilians through his speech in Hrtkovci on 6 May 1992.

the Indictment (with the exception of plunder) through all of his inflammatory speeches,

calling clearly and directly for the expulsion and forcible transfer of the non-Serbs, in

them to “primates” and “vampires” and qualifying them as cowards. In the same way, he

“excrements”. I hold that the use of these terms, together with his constant references to

eye, a tooth for a tooth” and “revenge is blind”, Vojislav Šešelj also took the risk that

murder, torture, cruel treatment and destruction would be committed in furtherance of the

participated in the JCE, the purpose of which was to force through the perpetration of

crimes, the non-Serbs to leave the territories claimed by the Serb forces.

Also, in my view, no reasonable trier of fact could have dismissed Vojislav Šešelj’s

responsibility for aiding and abetting. Indeed, all the conditions required by case–law have

been met to establish, on the one hand, his acts of material and moral assistance to his

volunteers, called “Šešeljevci”, and, on the other, his substantial contribution to the crimes

committed by these volunteers. This assistance comprised not only the recruitment of

Serbian Chetnik Movement (or S^P) and of the Serbian Radical Party (or SRS), which he

controlled with an iron fist. In addition, before going to the front, these volunteers were

indoctrinated with his violent speeches that, instead of reminding them of the need to

abide by the Geneva and the Hague Conventions, fostered violence against the non-Serbs by

brandishing the chivalric traditions of the Chetniks, who are not known for exercising

restraint on violence in war time. The Šešeljevci were deployed on the ground in localities

more often than not decided by Vojislav Šešelj. Besides, these volunteers knew full well

what their mission was: to participate in the ethnic cleansing operations conducted by the

Serb forces, by forcibly removing the non-Serbs from territories claimed by the Serbs.

Furthermore, based on the evidence on the record, it appears that Vojislav Šešelj’s

numerous visits to the field, and the speeches he delivered during these visits, boosted the

morale of these volunteers and encouraged them in their mission. The evidence has shown

that these volunteers and their families were financially, medically and psychologically

supported by Vojislav Šešelj, his Chetnik movement and his party during the entire time of

their military service and even after that time, which constituted another reason to enrol,

considered as their “God” or “Supreme Commander” – I am quoting the evidence.

the relevant time, we also admitted ample direct and circumstantial evidence that, in my

view, serves to establish it. Thus, the majority does not even consider it, which is not

reasonable for a trier of fact.

volunteers: in the majority’s view, the fact that these volunteers were officially placed

as incitement or aiding and abetting. However, as regards Vojislav Šešelj’s responsibility for

participating in a JCE with the Serbian forces and their leaders, the incorporation of the

better, and the Trial Chamber could have also done better from the outset of this case,

On reading the majority’s Judgement, I felt I was thrown back in time to a period in

human history, centuries ago, when one said – and it was the Romans who used to say this

to justify their bloody conquests and murders of their political opponents in civil wars: