Judge Carmel Agius from Malta was appointed president of the Tribunal and his Chinese colleague Liu Daqun was elected vice-president. The president and the vice-president – most likely the last judges to hold the posts – were elected for the period of two years. Their term of office will begin on 17 November 2015 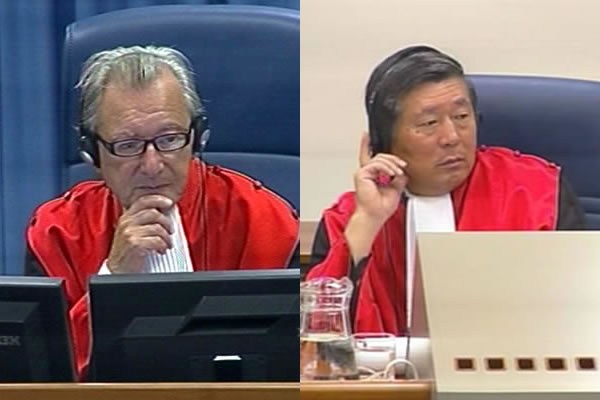 Carmel Agius and Liu Daqun, new president and vice president of the Tribunal

The permanent judges of the International Criminal Tribunal for the former Yugoslavia today elected Judge Carmel Agius and Judge Liu Daqun president and vice-president of the Tribunal. Agius and Liu will remain in office for two years. The term of office of the newly appointed Tribunal’s officials will begin on 17 November 2015.

Maltese judge Agius was appointed the Tribunal's vice-president in 2011. He will now replace the US judge Theodor Meron, who will remain the president of the Mechanism for International Criminal Tribunals. Judge Agius has been at the Tribunal since 2001. From 2003 to 2010, he was the presiding judge in the cases against Radoslav Brdjanin, Naser Oric and seven Bosnian Serb military and police officers who were on trial for the crimes in Srebrenica. In 2010, Judge Agius was appointed to the Appeals Chamber.

Before joining the Tribunal, Agius was a judge in the Court of Appeal and the Constitutional Court in Malta. He was also a member of the permanent Court of Arbitration. Judge Agius headed the Maltese delegation at the meetings of the UN Commission for the Prevention of Crime and Criminal Justice in Vienna and at United Nations Congresses on Crime Prevention and the Treatment of Offenders. In late 1990s, Judge Agius represented Malta at the meetings of the United Nations Preparatory Committee on the proposed Permanent International Criminal Court. He was later involved in the work of the Preparatory Commission for the International Criminal Court which drew up the Rules of Evidence and Procedure and the Definitions of Crimes.

Judge Liu Daqun joined the Tribunal in 2000. From 2001 to 2005 he was the presiding judge in the cases against Naletilic and Martinovic, against Blagojevic and Jokic and in the Halilovic case. He was subsequently appointed to the Appeals Chamber. Just like president Agius Judge Liu is a member of the permanent court of arbitration in The Hague.

Before the UN Security Council appointed him as one of the judges at the Tribunal, Judge Liu served in the Chinese Foreign Ministry in a number of different capacities. In 1999, Judge Liu was appointed ambassador in Jamaica. He was a member of the Chinese delegation at the conference which resulted in the establishment of the International Criminal Court.

The Chinese judge began his academic career in 1994 when he was appointed professor of international law at a faculty of law and political sciences. Judge Liu teaches international law in universities in China and around the globe.