JUDGE ANTONETTI TO WITHDRAW IN A BID TO DEFEND JUDGES' INTEGRITY

'How can we accept a system in which the President, who chooses the judges at his discretion, rules in the Appeals Chamber, then in the review Chamber and in the appeal of the review decision?', asks Judge Jean-Claude Antonetti in a bid to justify his decision to withdraw from the chamber considering Milan Lukic’s appeal against the dismissal of his motion for a review of his judgment 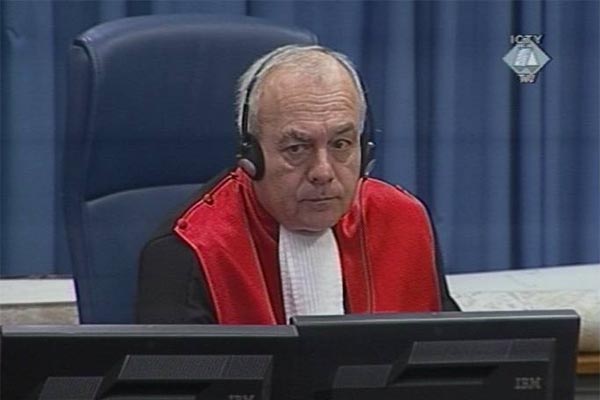 Jean-Claude Antonetti, judge at the Tribunal

In February 2014, Milan Lukic submitted a motion for a review of his judgment, which had been confirmed on appeal. He claimed he had new facts which had been unknown during the trial and the appellate proceedings. Lukic was found guilty of killing civilians in Visegrad and was sentenced to life in prison. The appellate judgment was handed down by the Appeal Chamber headed by Judge Theodor Meron and comprising judges Antonetti, Sekule, Agius and Liu.

The Appeals Chamber dismissed Lukic’s motion for a review of his judgment on 7 July 2015. Judge Antonetti appended his separate opinion to the decision. This prompted Lukic's defense counsel Rodney Dixon to file an appeal, in which he asked for a new chamber to consider the motion. Judge Antonetti supported Dixon's demand and he withdrew from the Appeals Chamber which will consider Lukic’s appeal against the dismissal of the review motion.

In a document disclosed on Tuesday, Judge Antonetti quoted the Rules of Evidence and Procedure, which state that ‘[a] Judge may not sit on a trial or appeal in any case in which he has a personal interest or concerning which he has or has had any association which might affect his impartiality. He shall in any such circumstance withdraw, and the President shall assign another Judge to sit in his place’.

Explaining his withdrawal, Judge Antonetti first noted that ‘[t]he victims, the families of victims and the international community expect international justice to deliver impartial decisions based upon evidence'. 'How can we accept a system in which the President, who chooses the judges at his discretion, rules in the Appeals Chamber, then in the review Chamber and in the appeal of the review decision?', he went on to ask. In Judge Antonetti’s view, that was ‘unacceptable’.

'Any judge who has integrity and is independent must have the courage to withdraw from the case in order not to leave room for any criticism. As far as I am concerned, this is why I consider that I must not be part of the composition ruling on the request for review’, Judge Antonetti concluded.