SUSA: OVCARA WAS TRAGEDY FOR FAMILIES AND SERB NATION

Former justice minister in Hadzic’s government Vojin Susa denied the prosecutor’s suggestion that the prime minister and other people who were at a meeting in Velepromet in Vukovar on 20 November 1991 knew ‘what had happened in Ovcara but didn’t want to disclose it to the public’. ‘If I had known about Ovcara, I would have done everything to investigate the event. It is a tragedy not only for the families but for my nation, too’, Susa said about the murder of about 200 prisoners from the Vukovar Hospital 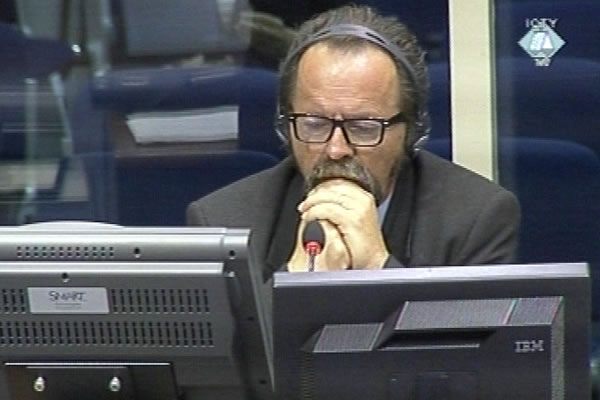 The last issue probed in the several days of the cross-examination of Vojin Susa was the government meeting in Velepromet in Vukovar on 20 November 1991. In the examination-in chief-Susa, former justice minister in the SAO Eastern Slavonia and the Republic of Serbian Krajina, spoke in detail about the meeting claiming that Milorad Vojinovic, a former JNA officer, acted as the chairman. Vojinovic allegedly said that the ‘war crimes are under the sole jurisdiction of the army’. Susa stressed in the examination-in-chief that ‘physical elimination’ of the prisoners hadn’t been discussed at the meeting.

Responding to the prosecutor, Susa confirmed that Goran Hadzic arrived at the meeting in the company of Zeljko Raznatovic Arkan. ‘The road was not safe’, Susa explained. Also, the witness confirmed the suggestion that Arkan’s role at the meeting was to bolster Hadzic’s position in the eyes of the military leaders.

The prosecutor then suggested that the ‘emotions ran high’ and Hadzic insisted there were ‘serious criminals’ among the prisoners who should be brought before court. In a statement to the daily newspaper Politika Hadzic confirmed that it was agreed to prosecute the prisoners in Vukovar. Susa argued that nothing had been agreed at the meeting. Instead, Hadzic made a ‘political statement that did not correspond to the events’. At the meeting Hadzic said that a ‘small group has been committing crimes’ and that the ‘government doesn’t believe all of the ethnic Croats are responsible for the crimes’. The prosecutor told Susa he had added this sentence to his statement this year: the witness didn’t mention this circumstance in his evidence in 1998 at the trial of the former Vukovar mayor Slavko Dokmanovic or in his statement to Hadzic’s defense in August 2014.

The prosecutor then showed the witness the informal minutes of the Velepromet meeting. According to the document, the main issue was whether to transfer the prisoners to Serbia. Susa and Arkan were against the plan to transport the prisoners to Sremska Mitrovica because the local Serbs (from Vukovar) had ‘their own police and judiciary’. Susa denied this, claiming that the informal minutes were a ‘piece of paper from a note pad of a military intelligence officer’. ‘Anyone, anywhere, at any time’ could have written those words, Susa noted.

When the prosecutor remarked that in early 1992 there had already been rumors in Vukovar about a mass grave in Ovcara and the murder of about 200 prisoners taken from the Vukovar Hospital, Susa replied that people had only been talking about ‘the existence’ of the grave, not about ‘who was in the mass grave’. The prosecutor put it to Susa that the government failed to do anything to make the police and the judiciary investigate what had happened in Ovcara. Susa replied that the investigation was in the hands of the police and the ‘government shouldn’t have had anything to do with it’. Finally, the prosecutor suggested that all those who were at the Velepromet meeting on 20 November 1991 knew ‘what had happened in Ovcara but didn’t want to disclose it to the public’. Susa said the suggestion was ‘the opposite of the truth’. ‘If I had known about Ovcara, I would have done everything to investigate the event. It was not only a tragedy for the families but also for my nation’, Susa said. Susa will continue his evidence tomorrow.