SENSE, working together with the Memorial Center in Potocari, has founded the Srebrenica Documentation Center. The purpose is to show how the events in July 1995 were investigated, reconstructed and prosecuted before the International Criminal Tribunal for the former Yugoslavia 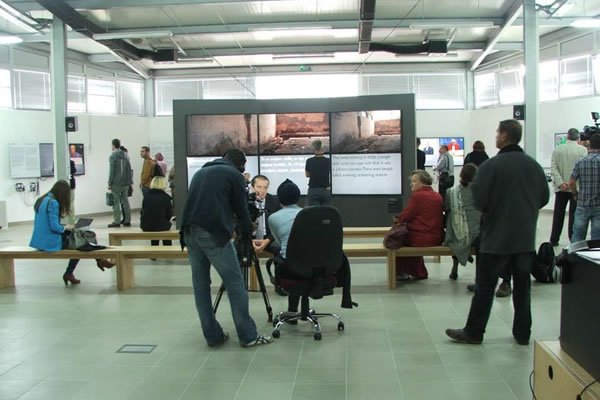 In the presence of a number of guests, Sense – Documentation Center Srebrenica was officially opened on Sunday, 21 September 2014. Members of the many victims' associations such as the Mothers of Srebrenica, political representatives from BH, the diplomatic corps and non-governmental organizations from Sarajevo, Zagreb, Belgrade, Podgorica and entire region were present at the opening ceremony. The opening attracted a lot of media interest.

Representatives of the Memorial Center, local authorities from Srebrenica, president of the BH Presidency Bakir Izetbegovic and SENSE director Mirko Klarin addressed the audience. The speech of the Tribunal’s vice-president Carmel Agius caused a great deal of interest. The Maltese judge sees the opening of the Center as an important aspect of the Tribunal’s legacy and the best way to present the Tribunal’s work and to put the archives from The Hague to use.

The crimes committed in July 1995 in Srebrenica have been the subject of nine trials before the International Criminal Tribunal for the former Yugoslavia. While covering those trials and reporting daily on the courtroom developments, SENSE has accumulated volumes of material: thousands of hours of video footage of witnesses' testimonies, including survivors, investigators and perpetrators; video recordings from July 1995; crime scene and aerial photos; as well as military documents seized in the headquarters of units involved in July 1995 attack on the protected area.

With the aim of locating this living historical archive where it belongs, SENSE has been working with the Memorial Center in Potocari to establish the Srebrenica Documentation Center, a living multi-media library, open to everyone. Through witness testimonies and other evidence introduced at the trials, the Center will show how the events that unfolded in Srebrenica in July 1995 have been investigated, reconstructed and prosecuted by the ICTY.

At the Center, the ICTY Srebrenica chronicle will be available on two levels: first, as a multi-screen projection of the timeline of events in a single week in July 1995, supported by eight video presentations of the key segments of the Srebrenica story, from survivors’ testimonies, to judicial epilogue.

On another level, for those who want to learn in more detail about the testimonies of individual witnesses and/or documents admitted into evidence, the entire Documentation Center collection will be available for analysis in the database. The database contains more than a thousand hours of complete testimonies of execution survivors, family members of the victims, investigators, forensic specialists, the accused who have admitted their involvement in the crimes, as well as the evidence of other witnesses who have helped to reconstruct the events in July 1995. The database also contains a broad range of military documents, maps, aerial and crime scene photos, as well as the video recordings from the time of the events, that were used as evidence in the trials.

The Documentation Center has not been established to paint a full picture of all the events and all the crimes committed during the war in Bosnia and Herzegovina or in the area of Srebrenica. It has a modest goal: to show, based on the materials used in court, how the events in July 1995 have been investigated, reconstructed and prosecuted by the International Criminal Tribunal for the Former Yugoslavia. Nothing more, nothing less.