Last month, the representatives of the 15 victims’ associations from Bosnia and Herzegovina sent a letter to judge Meron calling for his resignation. This week they came to The Hague to talk to the Tribunal’s officials and get the response to their demand 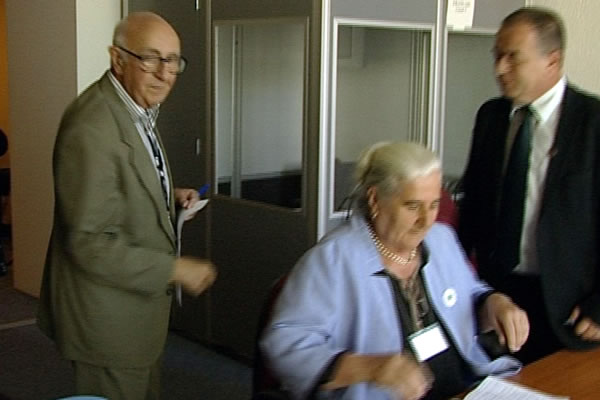 Munira Subasic and Murat Tahirovic during the meeting with Teodor Meron

Five weeks after the 15 victims’ associations from BH called for the resignation of Judge Theodor Meron, they have yet to receive a reply. Now, the president of the Association of Mothers of the Srebrenica and Zepa Enclaves, Munira Subasic, and Murat Tahirovic, president of the Organization of Victims and Witnesses of Genocide, have come to The Hague to talk to the Tribunal’s officials and get some answers.

In the past two days, Subasic and Tahirovic were received by the Tribunal’s Registrar John Hocking, Chief Prosecutor Serge Brammertz and finally, by the judge whose resignation they have sought – the Tribunal’s President Theodor Meron.

The victims’ representatives will leave The Hague with a strong impression that there ‘is a clear conflict and disagreement’ among the judges, Tahirovic told us after the talks. Subasic added that they wanted to meet with all the judges. The President didn’t agree, but instead suggested that they write a letter stating what they wanted to ask the judges. Then, the President would talk to the judges. Subasic told Meron that they had already written to him, calling for his resignation but that he never replied. Instead of writing again to Meron the victims’ associations would individually address each of the 22 judges warning them that they too are responsible for the fall in the Tribunal’s reputation and credibility, Subasic and Tahirovic said.

When they asked a direct question, ‘will you resign’, Meron replied he would not. Instead of his resignation, Meron offered Subasic and Tahirovic a ‘new chapter’. Asked what it meant, Meron replied that he would visit BH soon, cooperate with the victims’ associations and organize a big conference on the Tribunal’s work. As Subasic said, she told Meron that it was nothing but ‘empty talk’ and ‘whitewash’.

The victims’ associations have also written to the UN Secretary General Ban Ki Moon asking him to establish an independent commission to investigate the allegations made in the letter sent by the Danish judge Harhoff, and to see if the Tribunal has really ‘changed its course’ under the pressure of ‘military establishments’ of some influential countries.

As they await a response from the UN, the victims’ associations will launch an initiative for a petition to the BH Presidency, urging it to act and demand from the UN to call Judge Meron to account, Subasic and Tahirovic disclosed. In their view, Meron is the sole culprit for the recent negative developments in and around the Tribunal.

The statements of Munira Subasic and Murat Tahirovic are available on our website in the most recent, 596th edition of our TV Tribunal program.