WHERE IS THE TRIBUNAL HEADING FOR?

“Presumption of infallibility”, enjoyed by the appellate judges in the absence of a higher instance for the review of their judgments, should not shield them against public expressions of concern, criticism and protests against the ‘new course’ that they have plotted for the Tribunals in The Hague and in Arusha over the past few months 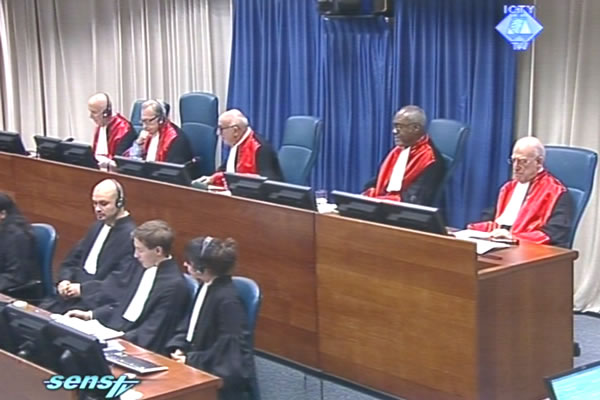 Appellate judges at the Gotovina trial

In a major upheaval following Judge Harhoff’s letter one tends to overlook the fact that public expressions of concern, criticism and protests against the Tribunal’s‘new course’ had been voiced long before 13 June 2013, when the letter was published, first in the Danish media and then worldwide.

In the opening lines of the letter that he sent to 56 of his friends and colleagues on 6 June, Harhoff refers to two recent articles, which ‘focus on events that cause deep concern both for me and for my colleagues here in the corridors of the the Tribunal'. Bearing in mind the dates, we can assume that he means the article entitled ‘What Happened to the Hague Tribunal’, an op-ed piece by Eric Gordy, published in the New York Times on 2 June and the blog post, ‘Two Puzzling Judgments in The Hague’, signed by T.J. and published on 1 June on the Economist’s website.

Had he waited for just one more day to send his letter, Judge Harhoff could have included another reference, the one to the piece written by former US Assistant Secretary of the State John Shattuck, a tried and tested friend of the Tribunal, who had taken part in its establishment. In his article ‘War Crimes Whitewash’, published on 7 June in the Boston Globe, Shattuck says that ‘if the ICTY majority had been sitting at Nuremberg, few, if any, Nazi leaders would have been convicted’.

Contrary to the claims made by those who believe that the problem lies with the first whistleblower judge rather than the change of the course he points to,it was not Judge Harhoff who launched the public debate about the recent developments at the Tribunal. Over the past few months, hundreds, if not thousands of critical articles and analyses on the Tribunal’s new course have been published. They were much harsher than Harhoff’s letter. Petitions have been signed, investigations called for, resignations demanded… yet to no avail. None of the top brass at the Tribunal has paid any attention to all that. ‘It will blow over’, they were saying. However, it has not.

The debate on what happens with the Tribunal was launched last November, after the first controversial judgment that acquitted Croatian generals Gotovina and Markač by a tight majority of votes (3:2). The initial salvoes in the debate were fired by judges Pocar and Agius, who did not mince their words in their dissenting opinions. They labeled the findings of the majority (judges Meron, Robinson and Güney) ‘simply grotesque’ and ‘contradict[ing] any sense of justice’, bluntly suggesting that the majority could have been guided by motives other than legal.

The debate has continued unabated, only to get more agitated after the acquittal of the former Chief of the VJ General Staff, Perišić, and to reach its boiling point with the acquittal of the former heads of the Serbian Secret Service, Stanišić and Simatović. There have been similar developments at the Rwanda Tribunal that shares both the Appeals Chamber as well as the concern and protests over the new course assumed following recent judgments.

It is up to the international law experts, who have been dealing with the issue since last November, to provide critical analysis in order to see whether the Tribunal indeed took a new course, who will benefit from it and what will be the impact of this new course on the Tribunal’s legal legacy. Here, we will merely highlight some glaring, easy to see facts, about the ‘volte-face’ in the jurisprudence of the Tribunals in The Hague and in Arusha. These facts indicate that there is something wrong with this picture.

In a short span of only three and a half months from mid-November 2012 to late February 2013, the Appeals Chambers of the Tribunals in The Hague and Arusha, led by Judge Meron, quashed by a majority vote three judgments convicting five high military and civilian officials who had been on trial for serious violations of international humanitarian law in the former Yugoslavia and Rwanda.

The three trials lasted for a combined total of nine years, or 900 trial days. The trial chambers heard a total of 453 witnesses and admitted into evidence thousands of exhibits. The trial judgments that found that the guilt of the accused had been proven beyond reasonable doubt, extended to a total of 2608 pages: 1377 pages for Gotovina and Markač, 595 pages for Mugenizi and Muginareza and 636 for pages Perišić. The five accused were convicted and sentenced to 24 years (Gotovina), 18 years (Markač), 30 years (Mugenizi), 30 years (Muginareza) and 27 years (Perišić): a total of 129 years.

And then, in the appellate proceedings, it was found that all this was erroneous and the accused were acquitted of all charges. The appellate judgments have 56, 55, and 49 pages respectively, and are among the thinnest judgments in the history of both tribunals (not only in volume). Some judges sneeringly describe them as ‘magazine judgments’.

It might well be true, just as for some other things in life, that it is not the ‘size that matters’ for appelate judgements. However, there should be a limit. For instance, the appellate judgment in the case against Florence Hartmann is as long as the Gotovina and Markač appellate judgment. In her case, the appellate proceedings took 22 months, three months longer than in the case against the Croatian generals. Perhaps the Appeals Chamber took more time to deal with it because of the peculiar nature of the case, where the Appeals Chamber played the triple role: that of an alleged injured party, the prosecutor and the trier. Perhaps that is why they needed more time to deliberate and produced a longer statement of reasons than in the case of the two generals charged with the war crimes against Serb civilians during and after Operation Storm in the summer of 1995. Let us justremind here that Hartmann’s ‘crime’ was to publish the fact that the Appeals Chamber of a UN court granted confidentiality to a set of documents produced by the Supreme Defense Council of the Federal Republic of Yugoslavia, thus making it impossible for them to be used before another UN court, the ICJ, in the case brought by Bosnia and Herzegovina against Serbia.

Let us go back to the quashed judgments of the Tribunals in The Hague and in Arusha. They beg the question: how is it possible for nine judges in three trial chambers (or, in fact eight, since one of the judges wanted to acquit Perišić at trial), so, how is it possible for eight professional international judges, to make such a grave mistake and put away five innocent generals and ministers for a total of 129 years? How is all of that possible after they had spent a total of 900 trial days hearing hundreds of witnesses and studying thousands of exhibits? How is it possible after they had spent untold millions of dollars of taxpayers’ money from all over the world? Only for the majority in the Appeals Chamber to summarily conclude that the efforts and the conclusions of the trial judges were worthless, not worth the paper they were printed on?

Is it possible that the members of the trial chambers of the two Tribunals, in The Hague and in Arusha, are so lacking in professionalism and integrity, that their findings and conclusions can be set aside so lightly? Who has appointed them as international judges, if they are really so inept? Were they appointed after they had pulled some strings ? Who looked at them and made a decision that they met the criteria set in Article 13 of the Statute, stipulating that ‘[t]he judges shall be persons of high moral character, impartiality and integrity who possess the qualifications required in their respective countries for appointment to the highest judicial offices’? What highest judicial office could be held by the judges whose judgments were so drastically torn to pieces on appeal? Who kept assigning new cases and new trials to the same judges who brought their profession into disrepute? Why? So that they could be humiliated on appeal again?

Is it possible that there is such a world of difference in terms of quality, professionalism, integrity and judicial temperament between the judges in the trial and appeals chambers? After all, with the exception of a single prison sentence that was revised following the appellate judgment, the appellate judgments still stand, unrevised and unquashed. Whether this is due to the infallibility of the appellate judges or to the lack of a higher instance for the review of their findings and conclusions… is an open question. In the absence of this higher instance, their findings and conclusions are protected by the “presumption of infallibility”.

However, the “presumtion of infallibility” should not shield them from public expressions of concern, criticism and protests against the ‘new course’ that they have plotted for the Tribunals in The Hague and Arusha.