The Trial Chamber has sentenced six former Bosnian Croat leaders to a total of 111 years in prison for crimes committed against Bosniaks and other non-Croats in Herceg Bosna. The majority in the Trial Chamber, with the presiding judge Antonetti dissenting, established that the conflict was international and that a joint criminal enterprise existed. The enterprise included the former Herceg Bosna leaders, and Franjo Tudjman, Gojko Susak and Janko Bobetko 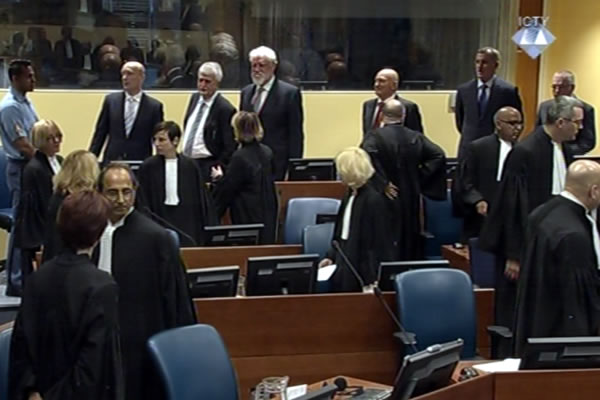 The Trial Chamber with French judge Jean-Claude Antonetti presiding handed down a total of 111 years in prison to the six former officials of the Croatian Community/Republic of Herceg Bosna for the crimes against Bosniaks and other non-Croats from 1991 to 1994. The judges unanimously sentenced Jadranko Prlic to 25 years, defense minister Bruno Stojic, HVO commanders Slobodan Praljak and Milivoj Petkovic to 20 years, military police commander Valentin Coric to 16 years and the head of the Prisoner Exchange Bureau Berislav Pusic to 10 years in prison.

The majority in the Trial Chamber, with Judge Antonetti dissenting, found that the conflict between the HVO and the BH Army was international. The evidence showed that the Croatian Army fought side by side with the HVO against the BH Army and that the Republic of Croatia had overall control over the Herceg Bosna armed forces and the civilian authorities. The judges also found that there was a joint criminal enterprise aimed at establishing a Croat entity in the BH territory that coincided in part with the borders of the Croatian Banovina in 1939. The territory was to be annexed to Croatia if BH were to break up or to become an independent state within BH with close tied to Croatia.

According to the judgment, the evidence proved that by December 1991, the HZ HB leadership headed by Mate Boban, and Croatian leadership headed by President Franjo Tudjman estimated that in order to accomplish that goal, they needed to change the ethnic composition in the territories they claimed as part of Herceg Bosna. The judgment found there was evidence that from mid-January 1993, the leaders of the HVO and the Republic of Croatia intended to established control over the territory they claimed as theirs and to launch a campaign of ethnic cleansing so that the area would end up being predominantly or purely Croat. They launched military campaigns which resulted in the expulsion of Bosniaks and the transfer of the Croat population from Central Bosnia to Herzegovina to reinforce the presence of Croats in the HB.

The Trial Chamber contends that the numerous crimes committed by the HVO forces against the Bosniaks from January 1993 to April 1994 clearly show a ‘pattern of behavior’. In most cases, the crimes were not committed ‘in a random manner by a few undisciplined soldiers’, the judges found. On the contrary, the crimes were the result of a plan put together by the participants in the joint criminal enterprise to remove the Muslim population of Herceg-Bosna’. The judgment contains 2,629 pages in six volumes, also notes that the members of the enterprise provided the personnel and coordination for the operations in the field and established a system for the expulsion of Bosniaks by murder, eviction, destruction of property, abuse, detention of civilians in prisons and prison camps in Ljubuski, Dretelj, Gabela and Heliodrom…

Although the judges disagreed on the mode of liability, all the sentences were handed down unanimously. The trial judgment thus confirmed all the crimes alleged in the indictment against the former Herceg Bosna leaders committed from the establishment of the Croatian Community of Herceg Bosna on 18 November 1991 to the end of the conflict in April 1994. The crimes were committed in eight Herzegovina municipalities: Mostar, Prozor, Gornji Vakuf, Jablanica, Capljina, Ljubuski, Vares and Stolac. All six accused had significant powers, they knowingly took part in the acts, had the necessary intent and contributed significantly to the accomplishment of the goal of the joint criminal enterprise, the judgment concluded.

The time Prlic, Praljak, Petkovic, Stojic, Coric and Pusic have spent in detention since April 2004, when they surrendered to the Tribunal, will be credited to their sentence, minus the time they spent on provisional release. Of course, the judgment will not be final until the Appeals Chamber has ruled on the appeals filed by the parties.