JUDGES COULDN’T SEE THE WOOD FOR THE TREES

Did the Appeals Chamber in the Perisic case follow the same pattern of restricting the definition of individual responsibility as in the case against Gotovina and Markac last year? If so, was the acquittal the only possible outcome? 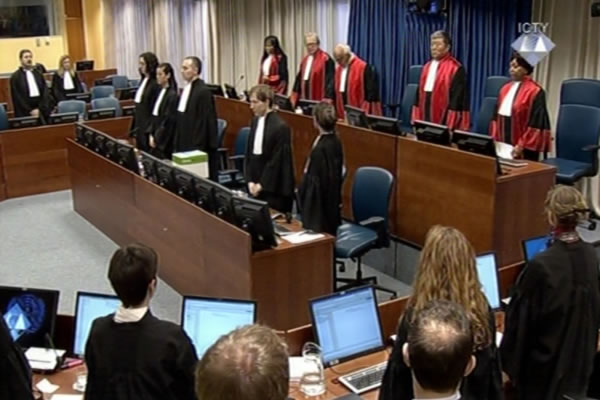 Did the Appeals Chamber, while considering Momcilo Perisic’s judgment, focus on the tree of ‘specific direction’ to such an extent that it couldn’t see the wood of evidence about where the assistance provided by the accused Chief of the VJ General Staff to the Bosnian and Croat Serb armies was in fact directed?

Or, was the concept of individual responsibility deliberately narrowed to the extent that no other outcome was in fact possible? This wouldn’t happen be the first time as something similar occurred in the case against Croatian generals Gotovina and Markac. In their case, the judges did not focus on the ‘specific direction’ but on the ‘200-meter standard’.

The majority in the Appeals Chamber reversed General Perisic’s conviction, finding that there was no evidence that Perisic’s assistance to the Bosnian Serb army had been ‘specifically directed’ at the commission of crimes. To that end, the appellate judges resurrected a paragraph from a 1999 judgment, which stated that, such ‘specific direction’ was a necessary requirement for the conviction for aiding and abetting. Chinese judge Liu disagreed with the conclusion, insisting that the element of ‘specific direction’ hasn’t been consistently or rigorously applied in the Tribunal’s jurisprudence. According to Judge Liu, the criterion wasn’t required for a conviction, but he was outvoted.

In the Gotovina and Markac case, where ‘the 200-meter standard’ was first made a ‘cornerstone’ in the trial judgment, only to be pulled out without a proper analysis of the entirety of the record, the entire construction collapsed. Unlike that, in Perisic’s case, the Appeals Chamber put the findings of fact from the trial judgment through the sieve of ‘specific direction’. The mesh was so small that nothing went through.

The majority in the Appeals Chamber says that the Trial Chamber did conclude that the VRS strategy was ‘inextricably linked to the crimes against the civilians’, but the trial judges did not find that ‘all VRS activities in Srebrenica and Sarajevo were criminal in nature’: ‘only some were’.

Furthermore, the assistance from Serbia was indeed extensive in nature, but the VRS wasn’t a ‘wholly criminal organization’. The VRS sometimes launched legitimate military actions and the aid in weapons, ammunition, training, personnel, military communications and the like was ‘not incompatible’ with these efforts.

And: it is true that some of the Yugoslav Army personnel seconded to the VRS committed crimes…but that doesn’t mean Perisic ‘specifically directed’ them there to do that.

It is true that Perisic knew that the VRS committed crimes and nevertheless continued sending them aid in the form of weapons, ammunition and personnel, but this was not sufficient for a conclusion that the assistance was ‘specifically directed’ at the crimes.

In the majority’s view, there are other ‘reasonable interpretations’. For example, a reasonable interpretation may be that Belgrade directed large-scale military support to the VRS to support their war effort, not the crimes. Perisic merely implemented the policy defined by the Supreme Defense Council and ‘administrated’ the aid that crossed the Drina river.

Limiting the concept of the individual responsibility has gone hand in hand with the expansion of the reason or ‘reasonable interpretations’. It suffices to remember how the majority in the judgment to Gotovina and Markac interpreted Tudjman’s famous words at the Brioni meeting on the eve of Operation Storm, that Croatia should ‘give [Serb civilians] a road while ostensibly guaranteeing them civil rights’. According to the majority of the judges in the Appeals Chamber in the Gotovina and Markac case, this could reasonably be interpreted as an attempt to ‘help civilians to temporarily depart from the area of conflict for reasons including legitimate military advantage and casualty reduction’. In his dissenting opinion, Judge Pocar found the majority’s reasoning ‘simply grotesque’.