LAHI’S WOMEN ‘PRACTICED BEATING PEOPLE UP’ ON THE WITNESS

A protected prosecution witness described how he spent the three days in detention in the KLA prison camp in Jablanica. First, he was beaten by male guards with baseball bats. Then, Lahi Brahimaj told two women in black uniform that they could ‘practice a bit’ on him, the witness recounted. The witness said that he was released from the KLA camp on the orders of Ramush Haradinaj 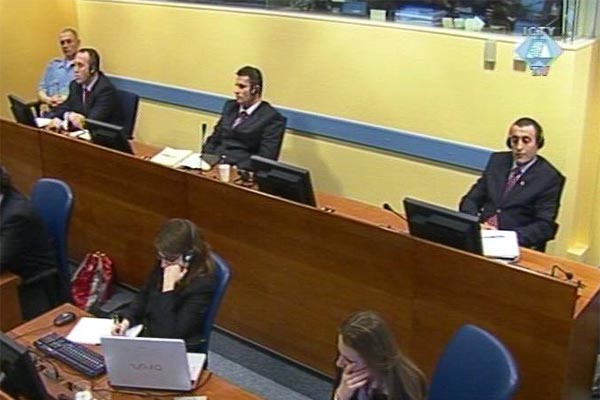 After a one-month break, the trial of Ramush Haradinaj, Idriz Balaj and Lahi Brahimaj continued today with the testimony of a protected witness, testifying under the pseudonym 3. He described the torture he survived during his three-day detention in the Jablanica camp. The three KLA commanders are charged with the crimes against the detainees in the camp in 1998.

The witness explained he was taken to Jablanica in June or July 1998 when Lahi Brahimaj arrived in the village where the witness was staying with his relatives. Since the witness knew Brahimaj the witness allowed Brahimaj to take him to Jablanica without much ado. The KLA headquarters and the prison for Albanians who were accused of treason and Serb collaborators were located in Jablanica. When they arrived there, Brahimaj took the witness to a room. Two Albanians were there: the witness’s primary school teacher Skender Kuqi and a person the witness didn’t know at the time. Later on, he heard that the man’s name was Pal Krasniqi. As the witness recounted, both were black and blue and disfigured from beatings. As the witness insisted, ‘I had seen dead and wounded people, but I had never seen someone in such a state’.

Soon after Lahi Brahimaj left the room, four or five men got in and started beating the witness on the back with baseball bats. When he was hit at the back of his head the witness fainted. Next thing the witness remembered was coming to on the floor. He was unable to walk and the guards had to take him out to urinate. Two days later the witness was brought to Lahi Brahimaj’s office. The office was just next door to the prisoner room. Lahi was there with a soldier; two women in black uniforms were there in the office. The witness was asked about the Serb attack on the village of Veliki Djurdjevik; he was forced to admit that he had helped the Serb forces to enter the village.

Lahi then told the women they could ‘practice a bit’ on the witness if they wanted. The women took it as an order to beat the witness and they hit him for a while with wooden batons. The soldier said that he and Lahi would go to the village of Glodjani and told the witness it would be better for him to admit that he had helped Serbs; otherwise he would be killed. The witness didn’t want to admit something he hadn’t done and decided to run away. He broke a window pane in the prisoner room and fled to a nearby forest. After he left the prison, the sight of his own body frightened him when he examined himself carefully to check for the consequences of the beatings.

Witness 3 already testified at the first trial of the three KLA commanders. The re-trial was ordered because of the problems with witnesses. Based on the witness’s evidence and the testimony of some other witness, the commander of the Jablanica prison camp Lahi Brahimaj was sentenced to six years in prison. Witness 3 will continue his evidence tomorrow.