A Turkish police officer who had served in UNMIK in Kosovo said in his testimony that he had found notebook with hand-written notes during a search of Idriz Balaj’s house. The prosecutor contends that the notebook is the war diary of the accused but the judges decided not to admit it into evidence with a majority vote. A protected witness described how a member of her family was beaten up and abused for two months in the KLA prison camp in Jablanica 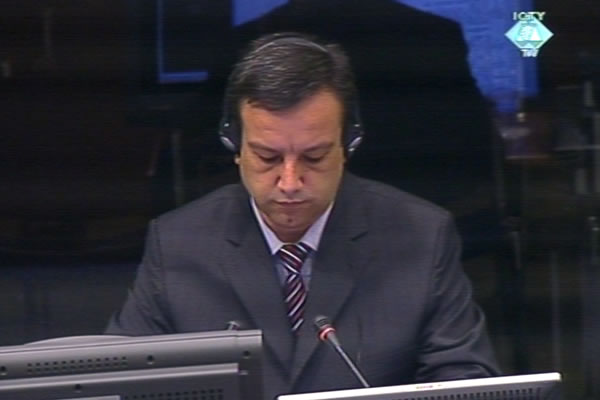 The trial of Ramush Haradinaj, Idriz Balaj and Lahi Brahimaj continued today with the evidence of two prosecution witnesses. The first witness was a Turkish police officer; he was followed by a protected witness testifying under the pseudonym 76. The prosecution called them in a bid to prove that the three former KLA commanders are guilty of the crimes in the Jablanica prison camp in 1998. The partial re-trial was ordered on six counts in the indictment because of witness problems. The Trial Chamber acquitted Haradinaj and Balaj on all 37 counts in the indictment and sentenced Brahimaj to six years. The two witnesses appeared for the first time in court in The Hague, unlike most of their predecessors who had already testified at the first trial.

According to the summary of the witness’s statement read out in the courtroom, Mehmet Togal served in the UNMIK drug squad in June 2002. In this capacity, he took part in the search of Idriz Balaj’s house. A KLA identity card belonging to the accused was found in the bedroom, and there was also a notebook full of hand-written notes. The prosecutor contends that the notebook is Balaj’s diary.

At the first trial of the KLA commanders, the Trial Chamber dismissed the prosecution motion to tender the diary into evidence as there was no proof that it was in Balaj’s handwriting. Prosecutor Menon thought Judge Moloto’s Trial Chamber could decide differently since the Turkish police officer who found the notebook was called to testify. The judges were still not satisfied about the diary’s authenticity and the prosecution’s motion was dismissed again with a majority of votes, Judge Delvoie dissenting. The prosecution indicated an appeal would be forthcoming. The prosecutor asked the witness only a few of questions and the defense lawyers, happy with the Trial Chamber’s decision didn’t examine the witness at all.

After Witness 76’s statement was admitted into evidence, prosecutor Gopolan read out the summary, saying that ‘at the beginning of the war in 1998’ a member of the witness’s family was kidnapped and taken to the KLA prison camp in Jablanica. In the statement, the witness explained that this happened because the Jablanica prison camp commander Lahi Brahimaj believed that her relative was ‘spying for the Serbs’. The witness’s relative was detained in Jablanica for two months; during that time the witness visited him four or five times. The witness said testified that her relative had been beaten up regularly. On his release, he told the witness that there were other prisoners whose screams he could hear when they were beaten. The witness’s relative said that the guards sometimes forced him and other prisoners ‘to stand up in the basement in water which was waist-high’. After the war, the witness’s relative disappeared and hasn’t been seen since.

After the prosecutor read out the summary, she asked the witness just a few questions in closed session to make sure that the witness’s identity remained protected. Brahimaj’s defense counsel Harvey nevertheless insisted that the cross-examination proceed in open session as much as possible. The transcript had to be revised several times because both the witness and the defense counsel were incautious and repeatedly revealed information about the witness’s identity. Most of the hearing proceeded in closed session. The witness will complete her evidence tomorrow.