SESELJ PLEADED ‘NOT GUILTY’ ON THIRD CONTEMPT OF COURT INDICTMENT

The Serbian Radicals’ leader pleaded not guilty to the charges stemming from his refusal to comply with a number of court orders to withdraw confidential information from his website. Seselj has made public on his website the identities of protected prosecution witnesses and has already been sentenced to 15 months in prison for this offense. The reason for Mladic’s conduct in court two days ago was discovered today 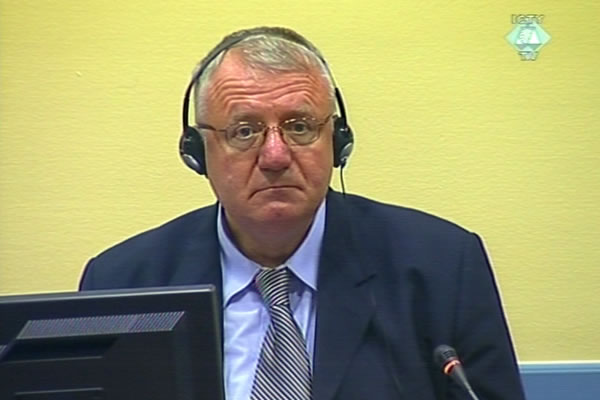 Vojislav Seselj entered his plea on the third indictment for contempt of court. Before Judge Burton Hall, Seselj pleaded not guilty to the single count in the indictment charging him with ‘knowing and deliberate refusal’ to withdraw confidential information about protected prosecution witnesses from his website.

The indictment to which Seselj today pleaded not guilty originated from the first contempt of court case against him, where he was charged with disclosing the identities and evidence of three protected prosecution witnesses. In May 2010, Seselj was sentenced to 15 months in prison. Since then the Trial Chambers have repeatedly ordered the accused to remove from his website the controversial material. After refusing to do so several times, Seselj faced the same charges once again. In the meantime, another indictment was issued against Seselj because he allegedly disclosed information about 11 other protected witnesses. At the recent trial, the prosecution called for a sentence of three years in prison.

Seselj said today that he ‘never acted to stall the case’ and would not therefore postpone entering his plea. Seselj contends that the prosecution and the judges are the main culprits for the fact that he has been in detention for eight years. And yet, Seselj has twice refused to enter his plea to the indictments issued by the Tribunal against him: in the main case against him for crimes in Croatia, Vojvodina and BH and at one of his contempt of court trials. Seselj thus prolonged both proceedings.

After making his plea, Seselj complained that the ICTY Registry had failed to grant access to his associates from the Serbian Radical Party to confidential documents and refused to cover travel expenses for their visits to The Hague. Seselj said that he was nevertheless ready for the beginning of a new contempt of court trial. The presiding judge promised that the Trial Chamber would consider the issue. The accused went on to complain about the conditions in the detention unit. Seselj said that he was ‘frustrated’ by the fact that General Ratko Mladic was transferred today from his part of detention unit. Seselj is convinced that it happened because the people in charge decided the Mladic’s conduct at the hearing two days ago, which resulted in his removal from the courtroom, was caused by Seselj’s influence. Seselj admitted that he did indeed advise Mladic not to accept any of the lawyers from the Tribunal’s list.

As the hearing drew to a close, the Serbian Radicals’ leader asked to be released provisionally for ‘a vacation’ during the Tribunal’s summer recess. Seselj made the motion orally, contravening the rules of procedure which calls for the provision of written guarantees of a state where the accused plans to stay. In Seselj’s case this is Serbia. Seselj made it clear that he was aware of that, but noted he didn’t want to ask for any guarantees from the ‘treacherous pro-Western regime’ in Serbia. Seselj urged the judges to grant his request despite the lack of state guarantees.

At Seselj’s main trial before the Tribunal, the prosecution has rested its case. It is now the defense’s turn to call evidence. Seselj indicated today that this most probably wouldn’t happen. The Trial Chamber is now expected to schedule the closing arguments.