HOW THE POLICE ‘GOT RID’ OF THE PARAMILITARY FROM SERBIA

The Bijeljina police did nothing to prosecute the paramilitaries from various groups that came from Serbia. Instead, the police returned them to Serbia because otherwise they would have to build ‘more prisons than we had military barracks in Republika Srpska’. So the police ‘got rid of them as quickly as we could’ by transferring them to Serbia, says the former RS MUP official 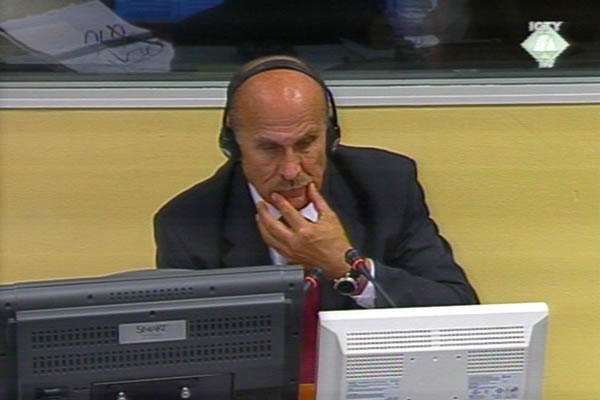 As a police inspector, Dragomir Andan visited Brcko in early June 1992. In the cross-examination, the prosecutor asked Andan about the visit at the trial of Mico Stanisic, the first Bosnian Serb interior minister, and chief of the Banja Luka police Stojan Zupljanin.

In Brcko, Andan learned that there was a ‘collection center for Muslim civilians’, as the Luka prison camp was called. Andan was told that the army was in charge of the collection center. The local policemen described Goran Jelisic as a ‘madman whom everybody, including the police, feared as he’d point a pistol at you as soon as look at you’. Andan contends he didn’t know at the time that Jelisic wore a police uniform and claimed he was a police officer. According to the witness, it was only later that he saw a photo of Jelisic in a police uniform shooting a Muslim civilian in the head. The Tribunal sentenced Jelisic to 40 years in prison for crimes in Brcko.

The crimes in the Luka prison camp happened in mid-May 1992 and the witness visited the camp several weeks later. Andan nevertheless claims he never heard of Ranko Cesic, who was on the list of police reservists. Cesic was sentenced by the Tribunal to 18 years after he pleaded guilty to the murder and rape of non-Serbs in the Luka prison camp.

The witness talked about the actions in which the Red Berets personnel were arrested in Brcko. After the Red Berets were disarmed, they were handed over to the FRY police at the border, as most of the Red Berets had come from Serbia. Those few Red Berets from Bosnia were not prosecuted because they ‘fled towards Ugljevik’, the witness noted. When the judge asked the witness why they were not all prosecuted in Republika Srpska, the witness replied it was a practical decision: otherwise they would have had to build ‘more prisons than we had military barracks in Republika Srpska’. The paramilitaries would have to ‘be fed and guarded’. ‘We got rid of them as quickly as we could’, Andan said, by transferring them to Serbia.

After the transfer, it was ‘up to Serbia’ to prosecute them. The ‘most extreme’ people would soon return to Republika Srpska and bring along with them new paramilitary groups. The witness made a list of all those who were arrested but wasn’t sure if the Bijeljina police later detained those who returned from Serbia, because in late August 1992, Andan was suspended from his job.

Assistant RS interior minister Tomo Kovac told Andan that he ‘did his job professionally, and deserved top marks, but that he had been used as a throwaway condom’ and told him not to come back to work. Andan never received an official decision on his suspension or disciplinary proceedings against him. The witness ‘never forgave’ Mico Stanisic for the way in which he had to leave the police. Stanisic didn’t even find the time to receive him, evading the witness’s numerous attempts to tell him ‘like it is’ about Kovac’s actions. Stanisic’s secretary would always tell Andan that Stanisic was busy or away. Andan had expected that the minister would hear him out and appoint an independent commission to deal with his case. Today Andan said he hoped he would get a chance to ‘sit down with Stanisic and talk to him’.