At the trial of the former Bosnian Serb police leaders, the prosecution contends there was no real effort to expel the ‘scum and murderers’ from the reserve police in Doboj in 1992 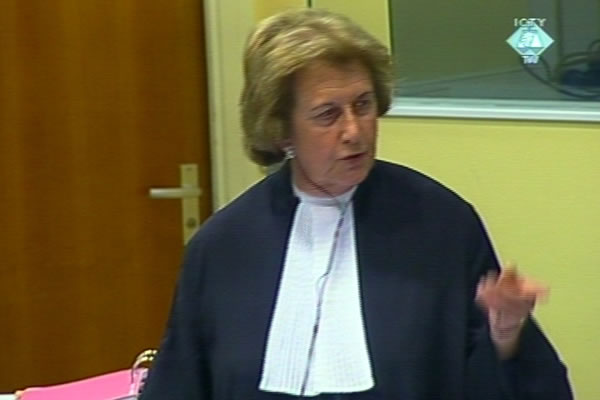 Joanna Korner, prosecutor in the Tribunal

As prosecutor Korner continued her cross-examination of Andrija Bjelosevic, she asked him about the arrests and abuse of Muslims and Croats in 1992. For the past 12 days Bjelosevic, former chief of the Security Services Center in Doboj, has been testifying in the defense of Mico Stanisic, the first Bosnian Serb police minister. Stanisic is on trial together with Stojan Zupljanin for crimes against non-Serbs in 1992 in 20 BH municipalities.

The prosecutor challenged the witness’s evidence in the examination-in chief: Bjelosevic claimed he was implementing Minister Stanisic’s orders to expel individuals with criminal record from the police. The prosecutor showed a list of wounded police officers from November 1992 which contained the name of Nikola Jorgic Joja. In 1997, the court in Dusseldorf convicted Jorgic of genocide and sentenced him to life for crimes he committed in 1992 in the Doboj area. The witness said that Jorgic was in the reserve police in line with an old order of the MUP whereby the Territorial Defense personnel were subordinated to the police. This practice in fact prompted Bjelosevic to protest to chief of the local police Obren Petrovic.

The prosecutor insisted that Bjelosevic didn’t make a real effort to remove Jorgic although he ‘knew that Jorgic was a murderer’ and to get rid of the other ‘scum and murderers’ from the police. According to the witness, he couldn’t personally investigate the matter because he had to rely on the reports he received from the police station chiefs, who told him that ‘the purge’ of the police ranks was completed. However, later that year the inspectors from the interior ministry found that people with criminal records still served in the reserve police, Bjelosevic said.

Though he headed the Doboj region police, the witness claims that in 1992 he didn’t know much about the arrests and abuse of Croats and Muslims, not even when the victims were prominent citizens. The witness signed the criminal report against Jozo Mandic, president of the local HDZ committee, who was 72 years old at the time. As he said, he doesn’t remember seeing Mandic’s name because ‘I may missed his name’ when he signed the report. The prosecutor went on to show the recording of a prisoner exchange where Mandic says he spent 125 days in prison, where he was badly beaten by the paramilitaries and the police. The witness said he had not been aware about the arrest and subsequent death of the retired chief of the local police, Karlo Grgic, an ethnic Croat until Grgic’s brother asked him to enquire into the matter. Bjelosevic learned that Grgic managed to escape after he was transferred to the hospital from the prison. Later, he heard ‘unconfirmed rumors’ that Grgic had been killed. The prosecutor claimed that a Security Service employee, Predrag Radulovic, told Bjelosevic about Grgic’s death. As for Ilija Tipura, former police officer who died in the Banja Luka hospital after he was beaten in the prison, Bjelosevic only knew that he had died in the hospital, but not how. According to Bjelosevic, ‘whoever arrested Tipura was wrong’.

In mid-June, Bjelosevic issued the order prohibiting the abuse of detainees and prisoners in the police building and in the prison after ‘somebody told’ him about such occurrences. Bjelosevic dismissed the claims made by the current mayor of Doboj, who used to be chief of police there, Obren Petrovic; he said that as Bjelosevic sat in his office, he could hear the prisoners being abused. Petrovic testified as a prosecution witness. Bjelosevic contends that he never heard the screams of people who were beaten. As he said, on one occasion, he saw a group of armed men who were forcing some Croat detainees to sing songs. Bjelosevic freed the detainees and expelled the armed men from the police building.

Andrija Bjelosevic is expected to complete his marathon evidence early next week.