PRSTOJEVIC: ‘I THINK ONE THING AND SAY SOMETHING ELSE’

In the examination of Nedjeljko Prstojevic, former president of the Ilidza Crisis Staff, the prosecutor put it to the witness that he has always been a stalwart ‘admirer and supporter’ of Radovan Karadzic. Prstojevic denied this, saying he was ‘a man who obeys law’. After a mild brain hemorrhage in 1996, ‘I sometimes think one thing and say something else’, the witness admitted. Prstojevic nevertheless blamed the discrepancies between what he had said at the Krajisnik trial in 2005 and his evidence now to bad translations and ‘incomplete’ transcripts of intercepted conversations 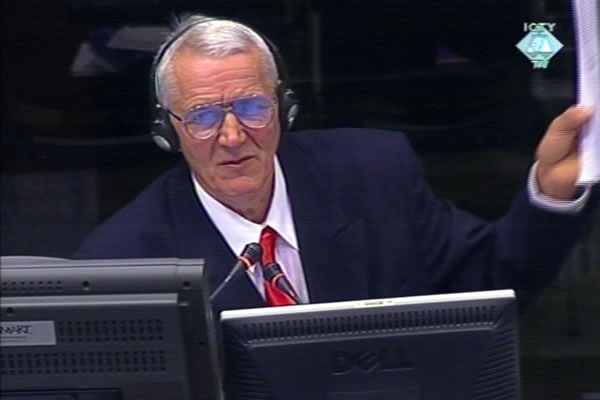 Continuing the examination of Nedeljko Prstojevic, former president of the Crisis Staff in the Serb municipality of Ilidza, the prosecutor put it to the witness he was a ‘leading admirer and supporter’ of Radovan Karadzic. According to the prosecutor, the witness is trying to protect the former Republika Srpska president by making a large number of corrections to the evidence he gave in 2005 at the trial of Momcilo Krajisnik.

Prstojevic labeled such prosecutor’s claims ‘weird’, because he was, as he said, ‘a man who obeys law’ who supported the Serb leadership when it acted fairly and lawfully, but opposed the decisions he thought were not feasible. Prosecutor Alan Tieger then quoted from an article published in the British newspaper London Observer. According to the article, at an election rally in Dobrinja in September 1996, the witness addressed a crowd of about 3,000 Serbs, praising Karadzic calling him ‘a legend’ and ‘the greatest Serb among us’, comparing him with Orthodox saints.

‘I don’t remember this at all’, Prstojevic replied. During the examination, the prosecutor often had to refresh Prstojevic’s memory by quoting from his evidence at the Krajisnik trial. Bringing up a document known as ‘Variants A and B’, the prosecutor tried to show that the Ilidza municipal authorities acted under the instructions issued by the SDS Main Board on 19 December 1991. In 2008, in his evidence in Krajisnik’s defense, Karadzic claimed that the instructions represented ‘an expert opinion of some frightened retired officers’ and that the SDS Main Board merely ‘circulated’ it.

In the Ilidza municipality, the instructions were implemented ‘partially’ and ‘formally’, Prstojevic said. When the Crisis Staff and the Assembly of the Serb Municipality of Ilidza were established in early 1992, an ‘end was put to’ the instructions. As he objected to the prosecutor’s questions, Karadzic several times all but put answers into the witness’s mouth. This prompted the judges to caution Karadzic.

Last Thursday, at the beginning of his evidence, Prstojevic said that he suffered a ‘mild brain hemorrhage in 1996’: as a consequence, he has problems remembering things. Prstojevic added that sometimes he ‘thinks one thing and says something else’. As for some glaring discrepancies between what he said in the Krajisnik case and what he claimed today, he claimed those were caused mostly by bad translations into English and incomplete transcripts of intercepted conversations, where some sentences end with three dots.

According to Prstojevic, at the 17th session of the Serb assembly he didn’t speak about ‘expelling’ Muslims from Ilidza as his words were interpreted at the Krajisnik trial. Rather, Prstojevic claims, he spoke about ‘pushing them back’, which is a military term used for the ‘enemy personnel’ and not civilians. In his speech before the Assembly, Prstojevic actually referred to a meeting on 18 April 1992 when Karadzic, Momcilo Krajisnik and members of the Serb government came to Ilidza. According to the prosecutor, the meeting dealt with the military and security situation. Prstojevic claims that this topic was only glossed over while the discussion focused on the future seat of the Serb government.