The prosecution has asked for long prison sentences for the former Herceg Bosna leaders, ranging from 25 to 40 years. The six accused are charged with the HVO crimes against Bosnian Muslims in 1993 and 1994 in Central Bosnia and Western Herzegovina 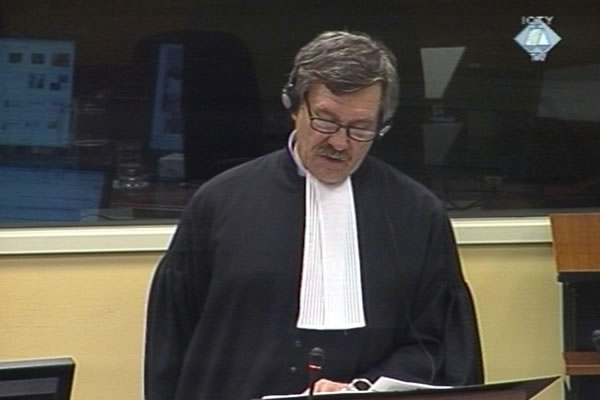 Kenneth Scott, prosecutor in the case of the former Herzeg Bosnia leaders

Concluding his closing arguments, prosecutor Kenneth Scott noted that the six people in the dock may look ‘like regular Sunday churchgoers’, but during the conflict – when they instigated, ordered and abetted the ethnic cleansing in the Herceg Bosna area – the six accused were just nothing but ‘bullies’.

‘This is your best chance to say – never more’, the prosecutor told judges Jean-Claude Antonetti from France, Stefan Trechsel from Switzerland and Arpad Prandler from Hungary. The prosecutor reminded the judges of the victims: the Tribunal was established for their sake, yet their voices are growing weaker. ‘Our task is to seek justice on their behalf as those who help the helpless’, the prosecutor noted.

In the first part of the hearing today, prosecutor Douglas Stringer talked about the roles of Valentin Coric and Berislav Pusic and their contributions to the joint criminal enterprise aimed at creating Herceg Bosna. As Stringer said, Coric ‘is hiding behind his office desk’ claiming he was just a ‘bureaucrat’, that he didn’t have any control over the military police and that he didn’t know about the crimes – although he was the head of the HVO military police.

According to the prosecutor, the evidence showed that Coric regularly received reports about the situations in the field and that he was well aware of the mass expulsion of Muslims from Western to Eastern Mostar. Coric knew very well that they were detained and abused in Dretelj, Ljubuski, Heliodrom and Gabela.Coric also knew about the poor conditions in the HVO prisons and prison camps and he knew that prisoners were taken to do forced labor at the front lines.

During the trial not much was heard about Berislav Pusic, the last accused. The prosecutor argued that Pusic was not ‘just a cog in the HVO machinery’ as his lawyers claimed in the final brief. As the head of the Commission for the Exchange of Prisoners, Pusic actively participated at ‘high-level’ meetings, prosecutor Pieter Kruger noted. The prosecutor illustrated the claim with the recordings from those meetings and documents that confirmed his contacts with the then Croatian foreign minister Mate Granic.

The prosecutor stressed that Pusic’s claims that he ‘lied about his powers’ in his previous interviews should not be believed. If Pusic lied earlier, why he should be trusted now, the prosecutor asked, noting also Pusic’s reputation at the time of the conflict.

According to the documents produced by the intelligence service, the SIS, in 1992 Pusic was known as ‘Berko Pusic a/k/a 200 Deutschmarks’. Pusic earned the nickname because of the amount he charged the Serb detainees for their liberty. As time went by, the amount went up and in 1993 Pusic could earn up to 8,000 German marks per Muslim detainee.

The defense teams of the six former Herceg Bosna leaders will start their closing arguments on Monday, 14 February 2011. It will take two weeks to deliver them.