At the appellate hearing, the prosecution called for a conviction of the former Macedonian interior minister Ljube Boskoski for his failure to investigate and punish crimes his subordinates committed in the village of Ljuboten. Johan Tarculovski’s defense contends that Tarculovski’s conviction and 12-year sentence were ‘not based on evidence’ 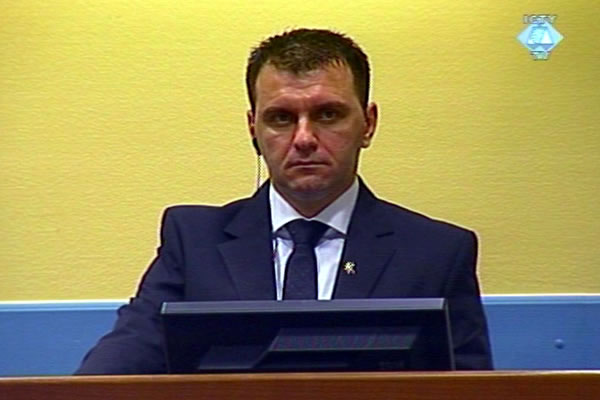 Johan Tarčulovski u sudnici Tribunala
At the appellate hearing in the Ljuboten case the prosecution today called for the quashing of Ljube Boskoski’s acquittal. Former Macedonian interior minister should be found guilty because he failed to investigate the crimes perpetrated by his subordinates and punish them, the prosecution contended. Johan Tarculovski’s defense urged the Appeals Chamber to acquit him on all counts or to impose a substantially milder sentence because there ‘is no direct evidence’ against its client. In July 2008, the Trial Chamber sentenced the former police officer to 12 years in prison. Tarculovski was found guilty of the murder of three Macedonian Albanians, burning down of at least 12 houses and inhuman treatment of about twenty villagers of Ljuboten on 12 August 2001.

Presenting its arguments against the acquittal, the prosecution noted that a superior ‘has an obligation to take any and all measures to punish the perpetrators’. If he fails to do so, his subordinates will consider their behavior acceptable and will be encouraged to perpetrate other crimes. According to the prosecution, mere ‘reporting of crimes’ and ‘delegating responsibility to investigate crimes’ does not relieve a superior of his command responsibility; superior officials have an obligation ‘to make sure that perpetrators are punished’. Boskoski had the ‘power to control the police, to order an investigation of crimes; he was a man of great energy and strength and he knew of the crimes in the village of Ljuboten’. Yet, the only thing that Boskoski was interested in, the prosecution argued, was to verify if the ‘terrorists’ killed in Ljuboten had been villagers or persons who had taken shelter in the village.

On the other hand, Boskoski’s defense counsel contends that he as a superior official had two options: take measures himself to investigate the crimes and punish the perpetrators or to delegate responsibility for the investigation and punishment to his subordinates. According to the defense, that is exactly what Boskoski did.

Johan Tarculovski's defense counsel reiterated on their key argument during the trial: the action in Ljuboten was a legitimate police action taken ‘to deal with the terrorists’. The defense noted that ‘sovereign countries have the right to respond to terrorist attacks’. If the Appeals Chamber accepts the prosecution argument, it would mean that ‘it will be impossible to fight domestic terrorism’, the defense argued.

The defense lawyers noted that the first-instance judgment was not based on direct evidence: judges invented that Tarculovski planned, abetted and ordered the crimes in the village of Ljuboten. Alan Dershowitz argued that ‘in this case there is no direct evidence of any war crime, only evidence of the results of crimes’. While he was reluctant to ‘play down the importance of murder and inhuman treatment in Ljuboten’, the defense counsel stressed that ‘in this case there is no conflict which would be under the jurisdiction of the Tribunal’. ‘The idea to apply the jurisdiction over a small case and a small-scale conflict has dangerous repercussions for both international law and the Tribunal’, the defense counsel said, adding that his client, ‘this young and inexperienced man, is the only person in prison for the Macedonian conflict’. His imprisonment is ‘an obstacle to peace’, the defense counsel said.

The prosecution called for the defense’s appeal to be dismissed, noting that the operation in Ljuboten was ‘an attack on the civilian population’ and ‘retaliation’ for the killing of 8 Macedonian soldiers in a nearby village on 10 August 2001.

Patrick Robinson, the presiding judge of the Appeals Chamber, didn’t indicate when the appellate judgment in this case could be expected.