The Appeals Chamber confirmed the Trial Chamber’s judgment sentencing Macedonian policeman Johan Tarculovski to 12 years and acquitting former interior minister Ljube Boskoski. In a separate opinion, Judge Liu noted that “the fact that a superior can effectively do nothing and still be acquitted of command responsibility is acutely troubling” 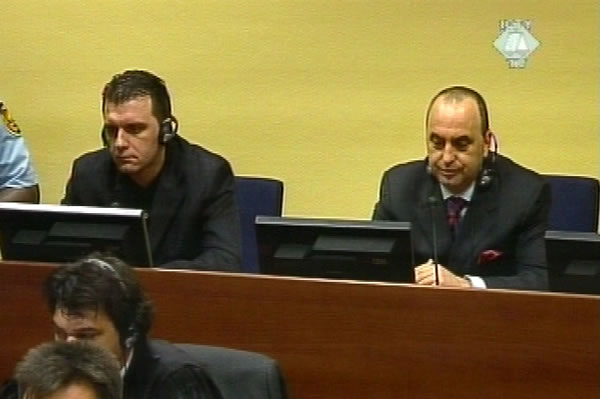 Ljube Boskoski and Johan Tarculovski in the courtroom
Today the Appeals Chamber dismissed in its entirety the appeal filed by Macedonian policeman Johan Tarculovski against the first-instance judgment, and confirmed the 12-year sentence he received from the Trial Chamber. Tarculovski was tried for the crimes perpetrated on 12 August 2001 in the village of Ljuboten near Skopje. The Appeals Chamber also rejected the prosecution’s appeal against the acquittal of Ljube Boskoski, former Macedonian interior minister.

In July 2008, the Trial Chamber found Tarculovski guilty of planning, inciting and ordering the crimes in Ljuboten, qualified as violations of laws and customs of war. Boskoski was acquitted of the charge that he failed to prevent the crime and punish perpetrators.

The Trial Chamber’s judgment, confirmed today, found that the Macedonian police officers under ‘effective command’ of Johan Tarculovski killed three civilians in the village of Ljuboten. Their houses were burned down and 20 villagers were beaten up. Dismissing all seven Tarculovski’s grounds of appeal against the judgment and the sentence, the Appeals Chamber confirmed that the objective of the police operation in Ljuboten was ‘an indiscriminate attack on ethnic Albanians and their property’. In the view of the Appeals Chamber, the accused led the police officers who were direct perpetrators. The Appeals Chamber found that the Trial Chamber gave due consideration the fact that Tarculovski was merely carrying out his superiors’ orders when it imposed the sentence.

The judges of the Appeals Chamber consider that the Trial Chamber didn’t err when it concluded in Boskoski’s case that a superior officer may, “under specific circumstances, discharge his obligation to punish an offending subordinate by reporting to the
competent authorities, provided that this report is likely to trigger an investigation or initiate disciplinary or criminal proceedings”. Judge Liu submitted a separate opinion, noting he believes that a superior should take ‘active measures’ to make sure that his subordinates are brought to justice for the crimes they have committed. In Judge Liu’s opinion, “the fact that a superior can effectively do nothing and still be acquitted of command responsibility is acutely troubling”. The Chinese judge nevertheless sided with his colleagues in the Appeal Chamber and supported the acquittal.

Johan Tarculovski will receive credit for the time he has spent in detention, since March 2005. In 2013, when he will have served two thirds of his sentence, Tarculovski can apply for early release.

About 120 Macedonian officials, journalists, family and supporters of Johan Tarculovski flew in to The Hague on a special charter flight to attend the hearing. As they left the Tribunal building, members of the association for Tarculovski’s defense expressed their disappointment with the final judgment. Tarculovski’s American lawyer Natan Dershowitz told the journalists that the judgment was ‘shameful’ and ‘politically’ motivated. Dershowitz believes that the crime his client was convicted of wouldn’t be punished anywhere. The USA, Russia and China do that all the time: they ‘bomb and kill civilians’, but nobody punishes them for that, Dershowitz insisted. Macedonia is the only one to be punished ‘because it is a small country’.