SESELJ'S PUZZLE FOR THE 'INTELLIGENT AND CLEVER'

At the trial for contempt of court, the prosecution has noted that the names and pseudonyms of protected witnesses disclosed by Seselj in one of his books were put together in such a way that ‘any person of normal intellect’ could identify them. Contrary to that, the accused contends that the identity of witness could be discovered only by ‘intelligent and clever persons’ with legal knowledge. As the accused put it, the whole case has been fabricated in order to impose defense counsel on him 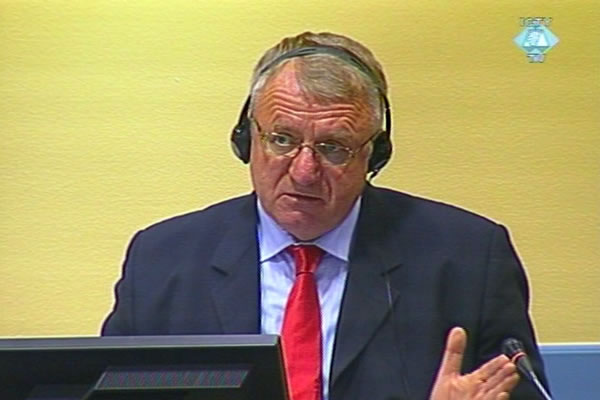 Vojislav Šešelj na suđenju za nepoštovanje suda
The trial of Radical Party leader Vojislav Seselj on contempt of court charges because he disclosed the identity of three protected witnesses was completed in one afternoon. Today, Bruce MacFarlane, prosecutor and amicus curiae, and accused Seselj representing himself delivered their arguments. Neither party called any witnesses.

As the hearing opened, the Trial Chamber with Judge O-Gon Kwon presiding granted the prosecution’s motion to tender into evidence a series of documents relevant for the trial. Among them are parts of Seselj’s book – the title of which remained confidential - in which names of three protected prosecution witnesses were divulged. MacFarlane delivered his address. In order to avoid further damage to the identity of protected witnesses, this went on for the most part in closed session.

Clarifying the ‘nature of Seselj’s book’ in the parts of the hearing open to public, the prosecution stated that the accused ‘managed’ not to couple the names of the protected witnesses next to their pseudonyms; however the information was presented as a ‘puzzle’ and ‘every person of normal intellect’ could guess their identity. That this was Seselj’s plan, MacFarlane added, can be seen from Seselj’s statements at the trial for crimes in Croatia, Vojvodina and BH. When the issue of the controversial book was raised in that case, the Radical leader said he had instructed his associates how to publish the information adding that he didn’t care if some intelligent and clever person could guess the identity of the witnesses. At the end of his argument the prosecutor called the Trial Chamber to impose on Seselj an ‘adequate sentence in the upper range of prison sentences’ the Tribunal has so far imposed for contempt of court. This, the prosecution argued, would ‘make it known that the intimidation of witnesses will not be tolerated’. Currently the harshest sentence for contempt of court is that of former Kosovo minister Astrit Haraqija, who was sentenced to five months in prison for attempted intimidation of a prosecution witness in the Ramush Haradinaj case.

In his reply Seselj rejected the prosecution claim that he intended to intimidate witnesses and disclose their identity. As Seselj put it, he wanted to ‘unmask the affair as such’. It is based on ‘false witnesses’ used by the prosecution to prove the allegations against him, he argued. The Radical leader contends that an ‘ordinary man’ could not guess the identity of the protected witness because he would, a priori, not read a book 1,200 pages long. Only a scientist would do that, one with legal knowledge. ‘If I wanted to intimidate witnesses I would print a leaflet with their names and photos’, Seselj concluded.

When the prosecution argued that the problem with the witnesses in the Seselj case was the greatest, the accused replied that there were no problems at all before the prosecution fabricated them. As Seselj noted, this was done in order to convict him on contempt of court charges and then to impose defense counsel on him, because the prosecution would claim he abused his right for self-representation. The imposed defense counsel would be a ‘prosecution spy’. Finally, Seselj would have nothing else to do but to sit ‘as an idiot’ and watch the trial. The prosecution resorted to this scenario, Seselj said, because it has suffered a fiasco at Seselj’s ‘main’ trial; the indictment has been ‘left in ruins’.

At the end of the half-day trial, Judge Kwon didn’t indicate when the Trial Chamber, with judge Parker and judge Bonomy as other two members, may deliver the judgment.