At the trial for crimes against Muslims in Visegrad the witness called by the Trial Chamber described how Milan Lukic killed Hajra Koric cold-bloodedly in front of a group of women. Contrary to that, the defense claims that a person mentioned as ‘he’ in one of the witness’s previous statements was not Milan Lukic but unidentified ‘other Chetnik’ 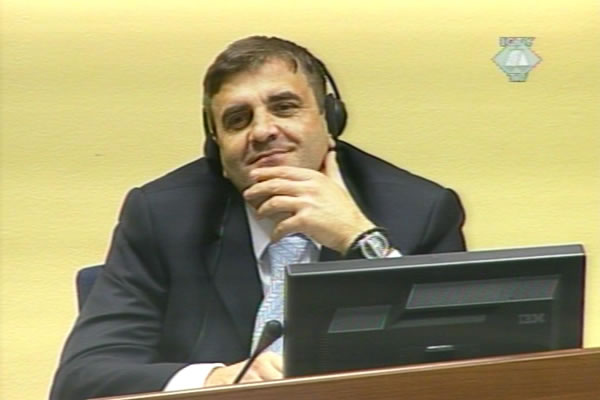 Milan Lukic in the courtroom
Following the subpoena issued by the Trial Chamber, witness CW-2 testified today at the trial of Milan and Sredoje Lukic with full protective measures: pseudonym, image and voice distortion. In the statements she gave to the Visegrad Association of Women Victims of War and the OTP investigators last year the witness recounted an incident in which Hajra Koric was murdered before her eyes. In the indictment, Milan Lukic is charged with the murder of Hajra Koric. In September 2008, in the course of the prosecution case, another witness,VG-35, testified about the same incident. That witness was also in a group of women who saw the murder.

In late June 1992, CW-2 headed towards Bikavac, a part of Visegrad, in the company of women who had been seeking shelter in abandoned houses in Visegrad. They were stopped in the street by Milan Lukic and ‘another Chetnik’ who wanted to see if Hajra Koric was among them. When Lukic identified Hajra Koric, he took her out of the column and shot her into the chest, the witness said today. Lukic then turned around and asked the women, ‘What’s the matter with her?’ He then fired another shot into Hajra Koric’s body on the ground.

Prosecutor Dermot Groome objected to the way in which the defense counsel examined the witness, noting that the discrepancies in the witness statements were the result of the witness using the pronoun ‘he’ in her statement to the Association of Women Victims of War and the person who interviewed her didn’t ask her to specify who ‘he’ was. Contrary to that, in her interview with the OTP investigators, they constantly reminded the witness to say who ‘he’ was whenever she said ‘he’ had said or done something. Prosecutor Groome had only one question for the witness but he asked it in closed session.

The evidentiary part of the Milan and Sredoje Lukic trial was supposed to be over by the end of this week. However, yet another defense witness would be examined via video link after the Tribunal’s Easter recess.