As Alija Gusalic was about to complete his evidence about his ordeal in the Batkovic prison camp, judges expressed their sympathy for his suffering. Seselj was very critical of it, arguing that they thus ‘prejudged the witness’s evidence’, which he considers to be ‘false’ 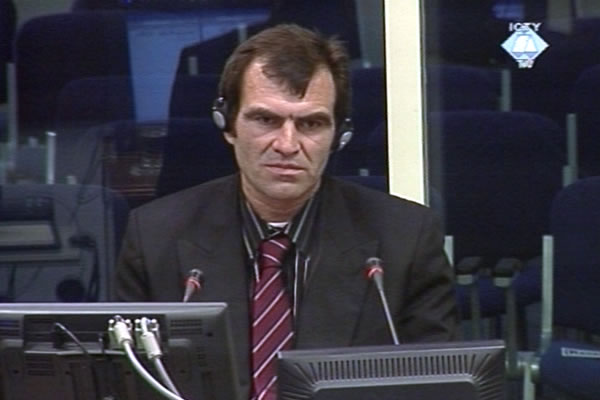 Alija Gušalić, svjedok na suđenju Vojislavu Šešelju
The last prosecution witness was examined today at the trial of Serbian Radical Party leader Vojislav Seselj before the trial was adjourned. The Trial Chamber decided to adjourn the proceedings on 11 February 2009 by a majority of votes because of threats to witnesses and jeopardy to the integrity of the trial proceedings.

The last prosecution witness was Alija Gusalic, who used to live in Bijeljina; he testified about his ordeal in the camps in Batkovic and Doboj at the trial of Slobodan Milosevic in 2003. Although the events in Bijeljina in 1992 were not included in the indictment against Seselj, the prosecution called evidence on the pattern of crimes that were part of the joint criminal enterprise the Serbian Radical Party leader is charged with.

Alija Gusalic confirmed that on 31 March 1992 he tried to throw a hand grenade into Bijeljina coffee bar Srbija which, as he claimed, was frequented by armed ‘Arkan’s soldiers’, ‘Seselj’s men’, and ‘Mirko’s men’, followers of the local Radical Party leader Mirko Blagojevic. As he rode a horse towards the café with a grenade in his hand, the witness was shot in his leg and could not throw the hand grenade in. The witness was taken to hospital. The same night, the fighting broke out between Serbs and Muslims in Bijeljina.

Soon after he left the hospital, Gusalic was arrested and detained first in the Batkovic camp and then, three months later in Doboj. He was then taken back to Batkovic where he remained until November 1993. In witness’s words, about 2,000 Bosniaks and Croats were detained in Batkovic and only two of them were members of the armed forces. Others were all civilians from Brcko, Bijeljina, Zvornik, Vlasenica and nearby villages. The prisoners were beaten on a daily basis, the witness recounted. Some 100 persons died as a consequence.

He himself was in a group of ten prisoners called ‘the specials’ by the camp guards. They were treated with particular brutality. They were beaten ‘for breakfast, lunch and dinner’, he said. The midnight beatings were especially bad: the prisoners were beaten to have ‘a good night’. The witness was beaten with metal rods, chains, wooden sticks and a ‘rock weighing some five or six kilos’. Because Gusalic was tall, a small guard made him kneel and then hit him over the head with a heavy rock. Two Muslim detainees took part in the beatings side by side with the guards, Gusalic claims.

In the cross-examination, Seselj challenged the witness’s credibility, noting that before the war the witness was punished for breaking public law and order by the Bijeljina magistrate. He went on to say that Gusalic was not beaten by the Serb authorities in Batkovic, but by Muslim prisoners. He didn’t say why they supposedly did it. He also contested the description of the methods used by the guards to beat the witness, in particular his story about the heavy rock being used to hit him over the head. According to Seselj, no one could have survived that.

Gusalic stood by his testimony, and the judges in the end expressed their sympathy for his ordeal. Seselj was very critical, claiming they ‘prejudged the assessment of the witness’s testimony, which he claims is ‘false’.

Vojislav Seselj will appear in the courtroom again on Friday, 6 March 2009 when he is expected to enter his plea on the contempt of court charges; an indictment has been issued against him for disclosing the identity of three protected witnesses.