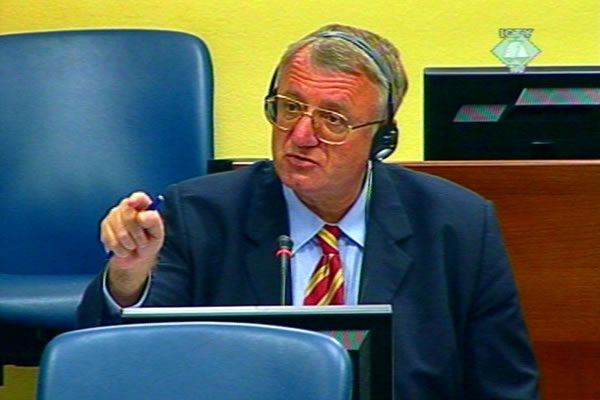 Vojislav Seselj in the courtroom
The trial of Vojislav Seselj has been suspended and it remains uncertain when it will resume. The outcome will depend on a series of decisions by both the Trial Chamber and the Appeals Chamber in the weeks and months to come following the prosecution motion to assign defense counsel to the accused. These decisions might even determine whether the trail of the Serbian Radical Party leader on charges of crimes against humanity in Croatia, Vojvodina and BH would continue at all. For his part, Seselj has threatened that – if his right to represent himself is revoked – the trial will continue only in his absence, or as he put it, ‘posthumously’.

The Trial Chamber allowed the prosecution today to appeal against the decision of 15 August 2008 rejecting its motion to suspend the proceedings until a decision is made on its motion to assign defense counsel to the accused. At the hearing today, Seselj objected this, claiming that it violated his right to an expeditious trial. Seselj also insisted that he be given the list of names of all future prosecution witnesses. Prosecutor Daryl Mundis categorically refused to disclose the names of future witnesses to Seselj saying that it would ‘put them in a vulnerable position’ and expose them to the risk of intimidation and persecution on the part of the accused and his associates. The prosecution obviously wants to prevent the situation it encountered in the Haradinaj case. At that trial, the prosecution lost key witnesses who were pressured into not testifying or decided to change their testimony.

The prosecution motion to revoke Seselj’s right to represent himself and to exclude his legal advisers from the proceedings is largely based on what the prosecution describes as a campaign of terror and intimidation against witnesses headed and organized by the accused and implemented by his associates. In about a hundred pages of its lengthy motion, the prosecution lays out the arguments why the accused should be assigned defense counsel. There are annexes, almost thousand pages, listing actual examples of intimidation, persecution and abuse of witnesses. The annexes are confidential because they contain information discussed in closed session; some of them have not been disclosed to the accused at all. Seselj today requested to be disclosed the whole motion together with the confidential annexes. The Trial Chamber indicated it would rule on this by the end of this week or early next week.

From the moment Seselj receives a translation of the decision, he will have a month to file his response to the prosecution motion. No matter the decision of the Trial Chamber on the motion to assign defense counsel, the case will doubtlessly find its way to the Appeals Chamber. It is impossible to say how long it will take, but it is not likely that the trial of Vojislav Seselj will continue before the end of this year if the Appeals Chamber supports the prosecution motion for a suspension of the trial pending the final decision on the motion to assign defense counsel.