Former Serb volunteer Nebojsa Stojanovic denied the contents of the two statements he gave to the OTP investigators about the role Seselj and ‘Seselj’s men’ played in Vukovar. The Trial Chamber granted the prosecution motion to declare him a hostile witness and allowed it to ask leading questions 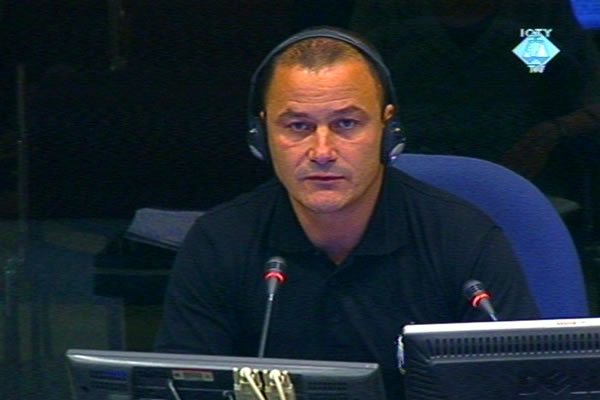 Nebojsa Stojanovic, witness at the Vojislav Seselj trial
Nebojsa Stojanovic came to testify at the trial of Vojislav Seselj after he was subpoenaed by the Trial Chamber. Stojanovic who introduced himself as financial manager from Belgrade made the solemn declaration today and then stressed that he wanted to testify as a defense witness; he was ‘between a rock and a hard place at the moment because the prosecution is pressuring him and his family’ into giving evidence against Seselj, witness said.

At the trial today, Seselj repeatedly accused the prosecution of ‘pressuring his witnesses into changing sides’. What Seselj and the witness called ‘pressure’, the presiding judge clarified today, are repeated calls to give evidence and warnings of possible consequences of failure to respond to subpoenas; failure to comply might lead to contempt of court charges.

Stojanovic testified about the events in Vukovar in October and November 1991. In the statement he gave to the investigators he said that Seselj was at the volunteers’ command post in the Nova Street in Vukovar in mid-October 1991. There he met local commanders and together with them made plans for joint actions of the volunteers and the JNA. Today the witness said that he didn’t remember that. Moreover, he denied that ‘Seselj’s men’ were present at all in Vukovar in October and November 1991.

In his statement, the witness also notes that ‘Chetnik songs were played every day in Vukovar’. He also quotes Seselj’s words, that ‘the JNA and the volunteers will liberate Vukovar one day but lives will be spared’. In his evidence today, Stojanovic said that Seselj ‘asked Croats who had blood on their hands to surrender’ promising them that they would be ‘treated according to the Conventions on Prisoners’. Stojanovic went on to add that ‘there were no signs of hatred in those calls’.

In the examination-in chief today, the witness ‘veered away from the statements’ he gave to the OTP investigators in 2004 and 2006, and the prosecutor asked the Trial Chamber to declare Stojanovic a hostile witness; this makes it possible for the prosecution to cross-examine and impeach the witness. When the Trial Chamber granted this request, the prosecutor first showed Stojanovic two witness’s statements asking him if the signatures on each page were his. Stojanovic confirmed that the signatures were his, adding that he didn’t read the statements before signing them. According to him, the statements were ‘read out from computer’ and then he ‘signed them on every page taking the word of the OTP investigator, Mr. Djuro’. When he recently met with Seselj’s defense team, he was ‘shocked’ when he realized that the statements that were purportedly his were not true.

‘You are a man with a university degree who worked on different posts as a manager and you signed every page of the two statements without reading them first. Do you want the judges to believe you?’ the prosecutor asked. When Stojanovic repeated his claim that the investigator read the contents of the statements from the computer and that he then signed pages taking the investigator’s word, the presiding judge decided to call prosecutor Dan Saxon to the witness stand as he was present during Stojanovic’s interview. When the prosecutor Christine Dahl asked that Saxon be given the transcript of today’s hearing in advance, and that his evidence be postponed until tomorrow, a heated debate between her and the presiding judge ensued. It culminated when the presiding judge threatened her with contempt of court. Outvoted by the members of his Trial Chamber, Judge Antonetti decided to postpone Saxon’s evidence until tomorrow.