SESELJ WAS ‘INTELLECTUAL DESCENDANT’ OF THE CHETNIK MOVEMENT

In his expert report, Greater Serbia Ideology, Yves Tomic concludes that Vojislav Seselj is ‘intellectual descendant’ of the Chetnik movement. The Chetnik or Ravna Gora movement originated in World War II, and Seselj adopted its goal: the creation of a Greater Serbia, as ethnically homogenous as possible. Seselj’s followers implemented this goal by forcible transfer and expulsion of the population 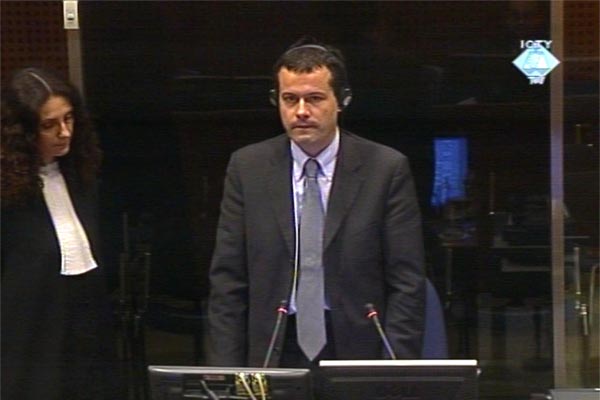 Yves Tomic, witness in the Seselj trial
In the expert report The Ideology of Greater Serbia in 19th and 20th Century he drafted for the OTP, Yves Tomic concludes that there is ‘a direct link between the Chetnik movement in World War II and the political movement Vojislav Seselj launched in the 1990s’. Tomic is a research fellow at the Nanter University.

On the first day of his evidence at the trial of the Serbian Radical Party leader, Yves Tomic spoke at length about the origins, ideology and platform of the Ravna Gora Chetnik movement and the Chetnik practice of ethnic cleansing in Bosnia Herzegovina, Croatia and Montenegro in World War II. In late 1941, Stevan Moljevic, one of the ideologists of the Ravna Gora movement, drafted the program for the establishment of ‘a homogenous Serbia that will encompass the whole area populated by ethnic Serbs’. There would be no minorities in this state: this would be achieved by ‘displacement and exchange of the population’.

In addition to the population exchanges, the ‘homogenization’ of the Serbian entity would be implemented by ethnic cleansing, Tomich noted. In his expert report, he quotes two reports sent by Chetnik vojvoda Djurisic to Draza Mihajlovic in early 1943. The first report states that Chetniks burned down 33 villages in the Bijelopolje district, killing 400 Muslim fighters and about 1,000 civilians.

The second report speaks about the Chetnik operations in February 1943 in the Pljevlje, Foca and Cajnice area. It contains a sentence that unequivocally reveals the genocidal intent: ‘In the course of the operations, the total extermination of Muslim population, regardless of their gender and age started’. According to vojvoda Djurisic’s report, 1,200 Muslim fighters were killed together with ‘up to 8,000 other victims: women, old men and children’. The Chetniks lost 22 men; 32 of their number were injured.

According to Tomic, the Ravna Gora movement advocated the idea of ‘a Greater Serbia within Greater Yugoslavia’. Greater Yugoslavia would comprise parts of Bulgaria, Romania, Hungary, Austria, Italy and Albania and would be a federal state. It would comprise a Greater Serbia, a rump Croatia and a Greater Slovenia. Serbia and Southern Serbia (Macedonia and Kosovo) would be parts of Greater Serbia in the east and southeast. Bulgarian cities of Vidin and Custendil were to be annexed to it. Its southern territories would comprise Montenegro, Herzegovina and northern Albania. In the west, it would include Bosnia, western Dalmatia, Serb-inhabited parts of Lika, Kordun and Banija and a part of Slavonia. The Dalmatian coast from Sibenik to Montenegro would belong to Serbia too.

In late 1980s, amidst of the political crisis that led to the disintegration of Yugoslavia, Vojislav Seselj adopted the ideas of the Ravna Gora movement. According to Yves Tomic’s report, Seselj saw himself as ‘a direct heir’ of Draza Mihajlovic, Stevan Moljevic and Momcilo Djujic. In 1989, Djujic made Seselj a Chetnik vojvoda, war leader. In Tomic’s words, Seselj is ‘intellectual descendant’ of the Ravna Gora movement, adopting the creation of an ethnically homogenous Greater Serbia as his goal. Seselj’s followers implemented this goal by forcible removal and expulsion of the population.