At the trial of Rasim Delic, former commander of the BH Army General Staff, the court heard the testimony of Zaim Mujezinovic, former commander of the BH Army 3rdf Corps military police battalion. He testified on the role of the military police in the identification of the criminal responsibility of the members of the armed forces in cases falling under the jurisdiction of military courts 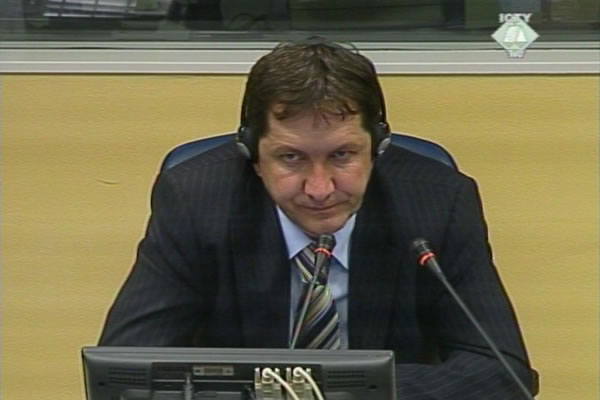 Zaim Mujezinovic, witness in the Delic trial
As the prosecution continues its case against Rasim Delic, former commander of the BH Army General Staff, the prosecution called Zaim Mujezinovic, former commander of military police battalion in the BH Army 3rd Corps. The military police was in charge of investigating the cases where criminal responsibility of military personnel had to be established within the jurisdiction of military courts, he said.

The military police was not the only body duty-bound to gather information and file criminal reports to the military prosecutor’s office; the Military Security Service in the 3rd Corps was under the same obligation, and it was the immediate superior of the military police According to the witness, this had to be done even when the perpetrator was unknown.

In its cross-examination, the defense pointed to the documents showing that the command of the El Mujahid Detachment didn't obey the orders of the 3rd Corps sent to subordinated units on disciplinary sanctions to be imposed on the troops. The El Mujahid Detachment didn't report this to the competent military police command, unlike all the other units ‘which were part of the regular BH Army', the defense contended.

When defense counsel Nicholas Robson asked him whether he had received the request to transfer a group of about 60 Serbian soldiers to Zavidovici on 11 September 1995 – this was when the group was allegedly captured on Mount Ozren – the witness said that he had not. He had no knowledge about the abuse of prisoners of war held captive by the El Mujahid Detachment troops, he added.

As the trial continued, Muris Hadziselimovic started his testimony. In 1995, he was the deputy district military prosecutor in Zenica. His jurisdiction covered the wider area of Zavidovici, where the El Mujahid Detachment soldiers committed the crimes the former commander of the BH Army General Staff is charged with in the indictment.