Prosecution witness Dragan Jovic, claims that he took the prisoners from the school in Rocevic to the execution site near Kozluk in July 1995, in compliance with the orders from his commander Srecko Acimovic. Testifying in June 2007, Acimovic claimed he had refused to take part in the shooting of about 500 Bosniaks captured after the fall of Srebrenica 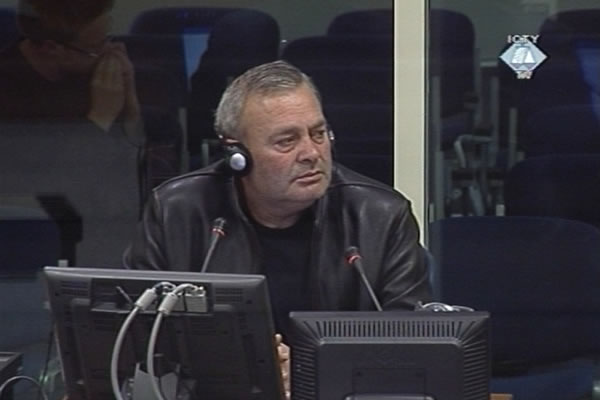 Dragan Jovic, witness in the trial of the former Bosnian Serb officials charged with crimes in Srebrenica
In July 1995, Dragan Jovic was a member of the Second Battalion of the VRS Zvornik Brigade. As he described in his evidence at the trail of seven Bosnian Serb military and police officers charged with crimes in Srebrenica and Zepa, his only task was to drive the commander of the battalion around. For this he used ‘his own fuel and his car – a Mercedes’.

The commander of the second Battalion of the Zvornik Brigade was Srecko Acimovic. He testified at the same trial in June 2007 claiming that, in the face of the pressure from Drago Nikolic and Vujadin Popovic, two security officers, he had refused to set up a firing squad for the execution of about 500 Bosniaks. They were captured after the fall of Srebrenica and held in the school in Rocevic.

Jovic contends that he had heard about the prisoners held in the school ‘one day before their execution’, but doesn’t remember when exactly this was. On the day of the execution, he was ordered by the commander to take him by car from the battalion command to the school in Rocevic. There was ‘a white armored personnel carrier’ parked in the yard, surrounded by fifteen to twenty soldiers. He was told that they were the military police officers of the Bratunac brigade.

Jovic was unable to specify the number of Bosniaks held captive in the school, but according to him the gym where they were was three quarters full. He saw his commander Acimovic speaking to ‘a heavy man with a round face wearing uniform with no insignia’. In his statement Acimovic described his meeting with Vujadin Popovic in front of the school in Rocevic who wanted him to set up a firing squad. Jovic was unable to identify the person Acimovic was talking to.

Jovic says he moved ‘two or three batches of prisoners’ but was not able to see their execution because the way to the gravel pit was ‘overgrown and rutted’. It was impossible for a truck to get to the execution site. The transfer and execution of the prisoners took about four hours. Jovic’s last task, again given by his commander Acimovic, was to bring sandwiches, juice and mineral water to the soldiers at the gravel pit.

Dragan Jovic was cross-examined only by the defense of Drago Nikolic, despite the fact that in his evidence he didn’t mention the former security chief in the Zvornik Brigade. Nikolic’s defense wanted to discredit Srecko Acimovic, Jovic’s former commander, whose testimony laid the blame on Nikolic as the man who organized the execution of the Bosniak prisoners.

Jovic described his former commander as an arrogant man who obtained a number of privileges for himself and ‘couldn’t care less for the ordinary soldiers’. Jovic complained several times that as the driver of the battalion commander he incurred ‘great costs’ because he had to use his own car and buy his own fuel.