NEW VERSION OF WHAT HAPPENED TO CAPTURED SERBIAN SOLDIERS

General Rasim Delic’s defense brings up a VRS document which says a group of Serbian soldiers captured in the village of Kesten on 11 September 1995 was stopped by ‘Muslim extremists’ on their way to Zavidovici, who then killed the captives and buried them in two mass graves 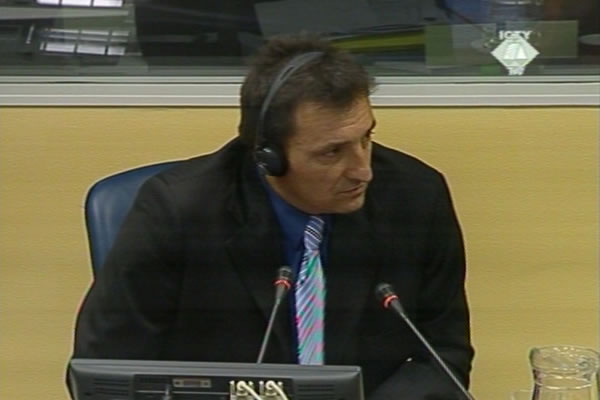 Fuad Zilkic, witness in the Delic trial
As the cross-examination of Fuad Zilkic, former commander of the BH Army 328th Brigade continued, General Rasim Delic’s defense challenged his credibility, noting that the witness and a part of his brigade had been involved in the kidnapping and killing of 61 VRS soldiers captured in the village of Kesten on Mount Ozren in September 1995.

The defense referred to a document from the VRS intelligence service dated October 2002. It contains information about a recently discovered mass grave in the Gostovic area. Serbian soldiers captured in the village of Kesten were allegedly buried there. The document states that the captured Serbian soldiers were driven towards Zavidovici in a truck on 11 September 1995. In the village of Kucice, they were ‘stopped by Muslim extremists led by a man by the name of Zilkic, taken to the abandoned property of Andrija Slankovic where they were killed and buried in two mass graves’. The document goes on to say that ‘a man by the name of Edin Porobic dug the bodies out with an excavator and transferred them to the mass grave in Gostovic’.

Vasvija Vidovic, Delic’s defense counsel, noted that there had been no other Zilkic who could have led a group of men called extremists in the document during Operation Farz on Mount Ozren. Members of the Asim Camdzic unit, operating within the 328th brigade, were similar to the Mujahideen in their appearance and behavior, she added.

‘I can’t believe this is so,’ the witness said, rejecting any possibility that the document spoke of him and his men. Answering the questions the defense asked about the similarity of his troops with the Mujahideen, the witness agreed only that the members of the Asim Camdzic unit ‘practiced religion more that the other BH Army troops’.

The defense put it to the witness that the military police of the 328th Brigade was under his direct command during Operation Farz in September 1995. Asked why he didn’t send military police to the village of Kesten when he learned that the Mujahideen took the captives from the BH Army troops, the witness answered that they were fighting.

The witness claimed that he had reported the kidnapping of the soldiers several times to his superior command, but the defense tried to show that there was no explicit mention of this in any of his reports. The only document sent to the superior command where this incident is mentioned bearing the witness’s signature states that the captives were ‘surrendered’ to the El Mujahid Detachment; the word ‘kidnapped’ was not used.