‘GOD IN HEAVEN, RAMUSH ON EARTH’

Prosecution witness Zymer Hasanaj admits he coined the phrase about Ramush Haradinaj in the spring 1999, but, as he now says, it doesn’t point to any command role of the accused in the KLA 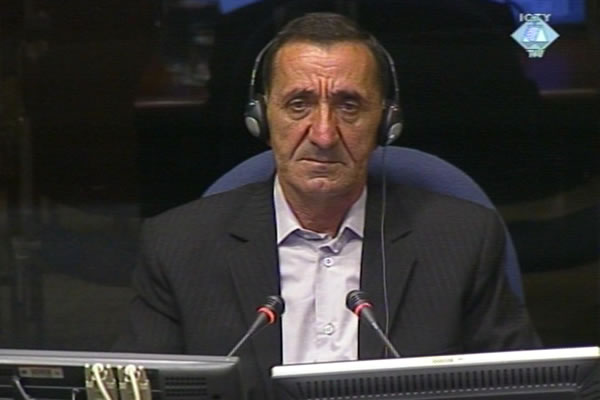 Zymer Hasanaj, witness in the Haradinaj trial
In his statement to the OTP investigators, witness Zymer Hasanaj, former member of the KLA from the village of Vranovac in the Barane valley, stated that Ramush Haradinaj had great authority in the Dukagjin area. People used to say, ‘God in heaven, Ramush on earth’, he added. Although he now says he maintains everything he signed then, he is trying to put a different spin on what he told the investigators.

Thus he now says he came up with the phrase in the spring of 1999, but not to point to any command role Haradinaj may have had, but to show respect for Haradinaj's resistance to the Serbian police. ‘He was good to us then, he’s good now, people like him,’ Hasanaj clarified.

In his statement, he said that at the meetings with local KLA commanders Haradinaj always sat ‘above everyone else’, at the top of the table. Now he explains that this doesn’t indicate Haradinaj’s command role. Haradinaj sat in the place of honor, he said, because a person coming from a different village was always ‘seated first’, as is Albanian custom.

Contrary to what he told the investigators, the witness said today that Din Krasniqi had been elected the KLA commander in the Barane valley ‘by the will of the people’, not of Ramush Haradinaj. The prosecutor then reminded him that in his statement he had said that the representatives of the village had gone to Glodjane to seek Haradinaj’s approval for Krasniqi’s appointment. Hasanaj confirmed it, adding he didn’t know what the outcome of the talks had been.

The trial of Ramush Haradinaj, Idriz Balaj and Lahi Brahimaj will continue tomorrow.