The prosecution wanted to call an additional witness to rebut parts of the defence case in the Vukovar Three trial, but after over a month of scheduling and rescheduling of his evidence, the Trial Chamber concluded that he was "unavailable for testimony". The closing arguments are scheduled for 28 February, and 1 and 2 March 2007 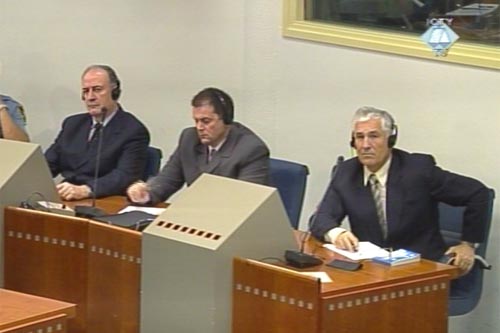 "Vukovar three" in the courtroom
The Trial Chamber with Judge Kevin Parker presiding formally concluded the presentation of the cases in the trial of Mile Mrksic, Veselin Sljivancanin and Miroslav Radic. The three are charged with the massacre at Ovcara near Vukovar.

The trial of three former JNA officers for crimes in Vukovar began on 11 October 2005. The defense rested on 7 December 2006. The Chamber allowed the prosecution to call another witness in rebuttal. His evidence was scheduled for 12 January 2007, but was later rescheduled several times. Prosecutor Marks Moore filed a request for another witness to be called, but the Chamber dismissed it and brought the presentation of the cases to a close with the conclusion that prosecution witness was “not available for testimony".

The would-be prosecution witness, SENSE has learned, was a former journalist with the Monitor, a Montenegro weekly. In 1992, he interviewed the accused Veselin Sljivancanin. In Sljivancanin’s cross-examination in November 2006, the prosecution quoted parts of this interview published under the headline "How I tore down Vukovar". In the interview, Sljivancanin answers to the questions about "the revenge", the taking of patients out of the Vukovar Hospital, the killing of more than 300 persons and the existence of a mass grave near the Ovcara farm. In answer to the prosecution’s questions, Sljivancanin said the interview was "fabricated". The journalist was full of hate towards him, Sljivancanin said, and they spent some time just “chatting”.

The closing arguments of the prosecution and defense at the trial of Vukovar Three are scheduled for 28 February, and 1 and 2 March 2007.