At the pre-trial conference in the case against three former KLA members, the accused re-entered their plea on the 21 counts of "second revised and amended indictment". The defense objected when it was announced that Chief Prosecutor Carla Del Ponte would make the opening statement on Monday, 5 March 2007 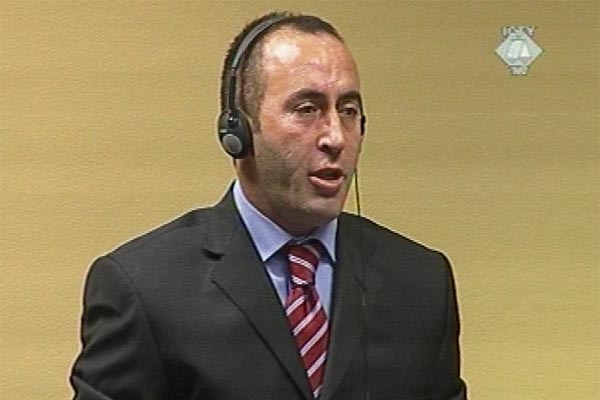 Ramush Haradinaj in the courtroom
"I plead not guilty. I'm very offended by these incriminations", Ramush Haradinaj said today as he entered his plea on the amended counts in the indictment. Together with Idriz Balaj and Lahi Brahimaj, he is charged with "intimidation, kidnapping, capturing, beatings, torture and killing" of Serbian civilians and of Roma and Albanians suspected of collaboration with the Serbian authorities.

The Trial Chamber consists of Judge Alphons Orie, presiding, and two ad litem judges, Ole Bjorn Stole of Norway and Frank Hoepfel of Austria. The presiding judge interrupted Haradinaj, warning him that he was “invited to enter a plea, not to complain". To do that, he first had to ask the Chamber for permission to address it.

Two other indicted, Balaj and Brahimaj, also pleaded not guilty. The Pre-trial Chamber then continued to consider the issues likely to affect the start of the trial, scheduled for Monday, 5 March 2007.

The prosecution submitted the final witness list containing 98 names and the special list with the names of persons it intended to call in the first two weeks of the trial. The Chamber allowed the prosecution 125 hours it asked for the examination-in chief of its witnesses. The defense will have 90% of the time for the cross-examination.