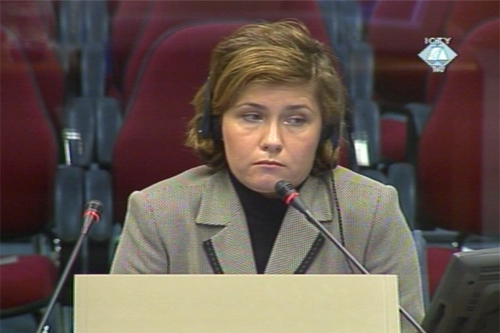 Sarlota Foro, witness in the trial of the 'Vukovar three'
At the Vukovar Three trial, Presiding Judge Kevin Parker drew the attention of the counsels – both defense and prosecution - to the fact that in their examination “there is a lack of attention to what are the material issues”. He announced that in the next few days he would propose “to put the number of issues” to the counsels as to “how the case is progressing”, in the opinion of the Chamber.

During the cross-examination of several prosecution witnesses called in recent days, the Chamber has been warning the defense counsel that questions designed to impeach the witnesses are important but not crucial. The defense counsel asked witness Sarlota Foro about her views of the Croatian Democratic Union, the amendments to the Croatian Constitution, uniforms and weapons of the National Guard Corps (ZNG), differences between a rocket and a mortar, the location of the frontlines and whether the defenders of Vukovar had had anti-aircraft weapons. The witness replied that she was not involved in politics, that she had spent the war in the shelter, that she had no military background but that she "soon learned to distinguish between the sound of a shell and that of a rocket", and to distinguish "JNA soldiers from paramilitaries". She added that the latter had scared the most.

Since Sarlota Foro was in a shelter in the Mitnica suburb during the shelling – this is where the local ZNG HQ had their headquarters – Borivoje Borovic, representing Miroslav Radic, insisted that she had also been a ZNG member and that she had worn a uniform. The witness denied the claims, but the lawyer continued to press the issue. A heated debate ensued, and was cut short by Judge Parker.

Novak Lukic, Veselin Sljivancanin's defense counsel, focused in his cross-examination on the claims the witness made in the examination-in-chief. The prosecutor had showed her a hand visible on a photograph showing the negotiations about the surrender of the Mitnica battalion on 18 November 1991 and she had said it was "probably the hand of Veselin Sljivancanin". She had also said Sljivancanin had commanded the surrender of the ZNG troops in Mitnica and that the event had been attended by representatives of the International Red Cross who had made lists of the soldiers and Cyrus Vance, as special envoy of the UN Secretary-General.

To counter her claims, the defense counsel showed two tapes. The first shows that the JNA representative at the surrender negations was Nebojsa Pavkovic, a JNA colonel at the time, not Major Sljivancanin. The footage confirms the second argument proffered by the defense: that on 18 November 1991, there were JNA officers higher in rank than the accused major in Vukovar. The second recording shows the surrender of the ZNG Mitnica battalion, but not who was making the lists. The defense claims the list was made by the JNA, not by the International Red Cross. He also claims that Sljivancanin did not command the surrender of arms and the evacuation of civilians, and that Cyrus Vance was in Belgrade on 18 November, not in Vukovar.

In his additional examination, prosecutor Aga Khan showed the second part of the recording of the surrender in Mitnica. This footage shows that a representative of the Red Cross was present. He then asked witness Foro to provide to the court at a later date the photograph of the surrender "clearly showing" the three ZNG negotiators and Major Sljivancanin as the JNA negotiator.