BELGRADE: SUM OF ISOLATED CRIMES IS NOT TANTAMOUNT TO GENOCIDE

Bosnia and Herzegovina has failed to present any evidence to prove the existence of a "genocidal pattern", Serbia and Montenegro representatives claim before the International Court of Justice. The pattern of many "isolated crimes that are not tantamount to genocide" cannot, Belgrade contends, be taken as "confirmation that genocide was committed". Belgrade cannot disclose to the other party and the court unredacted documents originating from the Supreme Defense Council 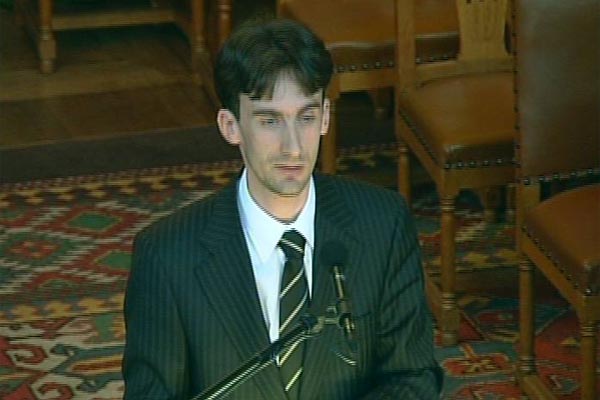 Sasa Obradovic, legal representative of Serbia and Monte Negro
At the hearings in the BH vs. SaM case, set to end tomorrow, Belgrade's representatives challenged the arguments presented by Sarajevo's representatives to the effect that conclusions on the existence of a genocidal intent can be drawn from the scale and pattern of crimes, the number of victims and the cruel treatment they were subjected to.

While he didn't deny that serious crimes were committed in BH and that there was a "pattern of criminal conduct", Sasa Obradovic, SaM legal representative, argued that the other party failed to present any evidence on the existence of a "genocidal pattern". The pattern of many "isolated crimes that are not tantamount to genocide" cannot, Belgrade contends, be taken as "confirmation that genocide was committed".

Obradovic accused once again the Sarajevo representatives of deliberately "exaggerating the number of victims" in Zvornik, Bijeljina, Kozarac, Omarska, Trnopolje and other sites where crimes were committed. The objective was to "create a false picture and impression about the pattern of mass crimes". Noting that "the number of victims is important for genocide", Obradovic quoted international law documents stating that for a crime to be qualified as genocide there has to be an intent to destroy a "substantial part" of an ethnic or religious group.

Obradovic also stressed the facts that, according to him, show there was no genocidal intent against the Bosnian Muslims and Croats. He noted that throughout the war non-Serb patients had been treated in hospitals "throughout Republika Srpska", adding that in 1993 Serbia took in more than 30,000 Muslim refugees. Observing that Zepa fell soon after the fall of Srebrenica, in July 1995, but that there were no mass murders there, Obradovic wondered aloud “why would there be a genocidal intent against the Muslims in Srebrenica, but none against those from Zepa, when both are ethnic Muslims from Eastern Bosnia?"

In answer to a question by a judge regarding the redacted portions of the minutes from the meetings of the FRY Supreme Defense Council, Obradovic explained that those were "strictly confidential military documents", adding that there were such documents in every country. The documents were given to the ICTY Office of the Prosecutor, accompanied by a motion seeking protective measures for parts of national security concern. The court decided to grant them. Belgrade's representatives before the International Court of Justice, Obradovic said, cannot discuss the contents of the documents for two reasons: first, the highest authorities in the country classified them as military secret, and second, the ICTY imposed protective measures and any violation of the court order might be punished as contempt of court. That is why "negative inferences cannot be made against SaM from the fact that the unredacted versions of those documents have not been disclosed to the other party", Obradovic concluded.

Sarajevo's representatives urged the court to draw such conclusions in the second round of BH arguments. According to them, the refusal of a state to disclose evidence in itself is "evidence of damage those documents could cause to a litigant".