RAJIC: "I FEEL GUILTY BECAUSE I AM GUILTY"

Ivica Rajic pleads guilty to four counts of the indictment, following a plea agreement with the Office of the Prosecutor. The prosecution and defense recommend a sentence of 12 to 15 years in prison. Rajic agreed to "full and substantial cooperation with the prosecutor", including "truthful testimony in any proceedings". Judge Orie wants to know if and how Rajic's plea will affect the Blaskic case 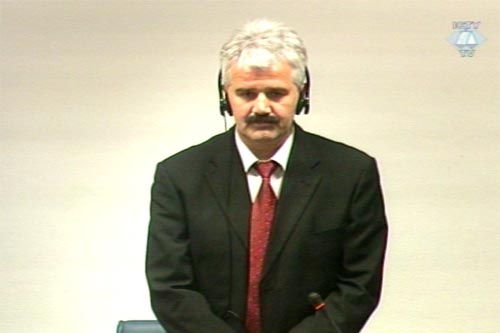 Ivica Rajic pleads guilty
"I have pleaded guilty because that's how I feel and because I really am guilty" – Ivica Rajic replied today when Judge Daqun asked him if his guilty plea was voluntary and informed.

Following the plea agreement with the prosecutor, Ivica Rajic pleaded guilty to four counts of the indictment: murder, inhumane treatment, confiscation of property and widespread destruction not justified by military necessity. The crimes are qualified in all of the counts as grave breaches of the Geneva Conventions. Rajic's guilty plea covers both command and individual responsibility. After the Chamber accepted Rajic's plea and found him guilty of the four counts, the prosecutor asked for the remaining six counts to be withdrawn. Four re-allege the crimes Rajic pleaded guilty to qualified as violations of laws and customs of war and two allege unlawful detention of Bosniaks in Vares.

Ivica Rajic, former JNA captain also known as Viktor Andric commanded the 2nd Operational Group of the HVO during the war in BH. The crimes he pleaded guilty to were committed in 1993 in the village of Stupni Do and in Vares. Rajic speaks about the crimes and his role in them in the Factual Basis, a document that is an integral part of the plea agreement.

Judge Alphons Orie wanted to know in particular today if the Factual Basis, where frequent mention is made of the then Rajic's commander Tihomir Blaskic, contains anything that would be "in contradiction of the findings of the Appeals Chamber in the Blaskic case". Terming the question "interesting", prosecutor Kenneth Scott replied that there was "nothing substantial" because Blaskic was not charged with the massacre in Stupni Do, where at least 37 Bosniaks were killed in October 1993.

The prosecution and defense agreed to recommend a single sentence of 12 to 15 years in prison. The defense would argue in favor of the lower end of the range and the prosecution the upper one. The Chamber as Judge Daqun reminded the parties, was in no way "bound" by the agreement reached by the prosecution and the defense and might impose any sentence it deemed appropriate on the accused, including the life sentence.

The agreement Rajic signed obliges him to "full and substantial cooperation with the prosecutor" including "truthful testimony in any proceedings" if asked to do so by the prosecutor.

The sentencing hearing for Ivica Rajic could be held in late November, as Judge Daqun indicated today.