LINK BETWEEN AIR STRIKES AND DEPORTATION

Through the testimony of General Milos Djosan, Slobodan Milosevic is trying to prove that the allegations concerning the deportations of Kosovo Albanians pertain to those locations in Kosovo that were the targets of the most intense air strikes, whereas there are no deportation charges for locations that were not targeted by NATO planes 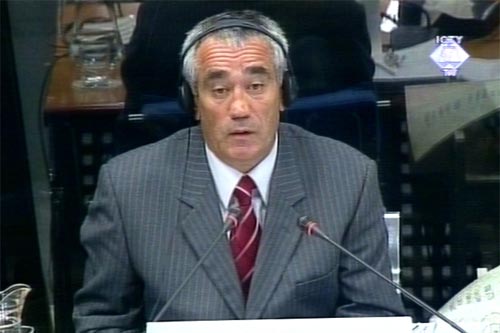 Milos Djosan, defense witness for Milosevic
In the spring of 1999, Kosovo Albanians left their homes to go to Macedonia or Albania "in fear of NATO planes, frightened that they would be caught in the cross-fire between the military and the police on the one side and the terrorists on the other, and under the influence of the propaganda and the pressure exerted by the KLA," retired General Milos Djosan claims. He has been called by Slobodan Milosevic as his defense witness.

In the time period relevant for the indictment against Slobodan Milosevic, General Djosan was the commander of the 52nd Artillery Rocket Brigade of the VJ, and the commander of the garrison in Djakovica, Kosovo. For the purpose of his testimony, the general prepared and brought to The Hague a number of maps showing the engagement of NATO aircraft in Kosovo after 24 March 1999. From the paragraphs of the indictment charging him with forcible deportation of Kosovo Albanians, Milosevic read out the names of towns and villages where civilians had been expelled, as the prosecution alleges. The witness then showed where those places are on the map. The areas of NATO air strikes had previously been marked on it. Pointing to the link between the departure of the population and NATO air strikes, Milosevic claims that the allegations concerning the deportations of Kosovo Albanians pertain to those locations in Kosovo that were the targets of the most intense air strikes, whereas there are no deportation charges for locations that were not targeted by NATO planes.

During its case, the prosecution dealt with the link between NATO air strikes and mass movements of refugees. Prosecution witness Patrick Ball presented a statistical study analyzing the links between NATO air strikes, KLA activities and the operations launched by Yugoslav security forces on the one hand and the mass waves of refugees and killings on the other. The conclusion of the study was that NATO air strikes and KLA actions had had little or no effect on the mass movements of the population and the killings in Kosovo. On the other hand, Ball claimed that the findings of his study were "consistent with the hypothesis that the Yugoslav forces carried out a systematic campaign of killing and expulsion".

In his testimony today, General Djosan confirmed half of one of the findings presented in Patrick Ball's study. He also spoke about intense air strikes targeting Pristina, Djakovica, Glina and other sites in Kosovo between 6 and 10 April 1999, when the Yugoslav forces had proclaimed a unilateral cease-fire because of the Orthodox Easter holidays. The second part of Ball's finding, which Milosevic's witness did not mention today, was that there had been no mass movements of the population and very few reports of killings despite the fact that both NATO and KLA had substantially stepped up, even doubled, their military activities.