Former police chief in Urosevac presented a timeline for the attack on Racak, noting the time when the police forces manned the trenches and sealed off the village and when individual “terrorists” were killed. All of them, Slobodan Milosevic’s defense witness claims, were killed in combat and “no one in the police acted beyond the limits of the law” 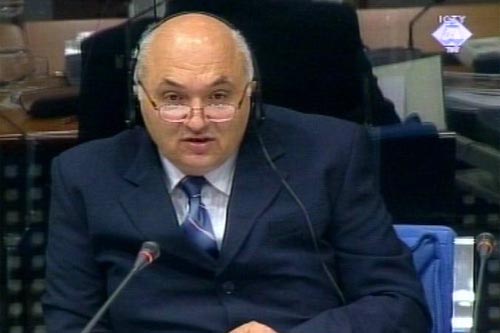 Bogoljub Janicevic, defense witness for Milosevic
Slobodan Milosevic used the testimony of Bogoljub Janicevic, former police chief in Urosevac, to present once again his interpretation of the events in Racak. On 15 January 1999, about 45 local Albanians were killed there. While the prosecutor is trying to prove that the FRY and Serbian forces had gone searching and killing from house to house and that half of the victims had been shot in a mass execution, Milosevic claims that this was an “anti-terrorist” police action against the local KLA members, which was merely a response to “provocations”.

The judges noted that Milosevic had already presented evidence about Racak, adding that “the Chamber is concerned about the way in which the accused is using the time allotted for his defense,” because he was still presenting evidence related to the Kosovo indictment instead of addressing the BH and Croatia indictments. Milosevic, however, considers the former police chief from Urosevac an important witness for the interpretation of the Racak incident because his police department had planned the action and he himself had followed its course from the nearby Stimlje, receiving reports from the field.

The judges wanted to see the plan for that action, but the witness said the document had burned in the Interior Ministry headquarters in Pristina, following a NATO air strike.

Janicevic presented a timeline for the attack on Racak, noting the time when the police forces manned the trenches and sealed off the village and when individual “terrorists” were killed. All of them, the witness claims, were killed in combat and “no one in the police force acted beyond the limits of the law”. Members of the international Verification Mission should be able confirm that, as they were deployed around the village and “could see every place in Racak”, the witness said He added that the Associated Press had filmed the action. The judges want to see the footage, and the prosecutor indicated he would try to get it.

When the judges asked Milosevic why he did not call police commanders who led the action in Racak as witnesses, the accused said he had “not planned” to call Goran Radosavljevic, while the other one, Milan Lecic, was dead.

Janicevic’s testimony will continue on Monday. The prosecutor should get the chance to cross-examine him then.